The World Bank recently reported that global energy prices could remain “historically high” until 2024. They expect energy prices to “rise more than 50% in 2022.” Given that energy is the only direct cost to the Bitcoin mining network, what might this mean for the future of PoW mining?

Speaking to Mas Nakachi, Managing Director at XBTO, he told us,

“A surge in global energy prices will likely lead to tighter profit margins for bitcoin miners, lowering the overall incentive to mine bitcoin.”

A reduction in hashrate

The security of the Bitcoin network relies upon maintaining the hashrate, which is the sum total of the computing power assigned to mining for new blocks. If the incentive to mine Bitcoin reduces, this could potentially lead to miners leaving the network. As recently as 2021, the hashrate of Bitcoin dropped by 40% in a single month as miners were shut down in China. However, as you can see from the below chart, there is only a loose correlation between Bitcoin’s hashrate and its price action. However, this is a hotly debated topic by Bitcoin Maxis. The drop in hashrate in October 2020 did nothing to stop the bull run that came directly after. Further, as the hashrate dropped drastically in June 2021, its price remained steady, hitting a new all-time high just months later. 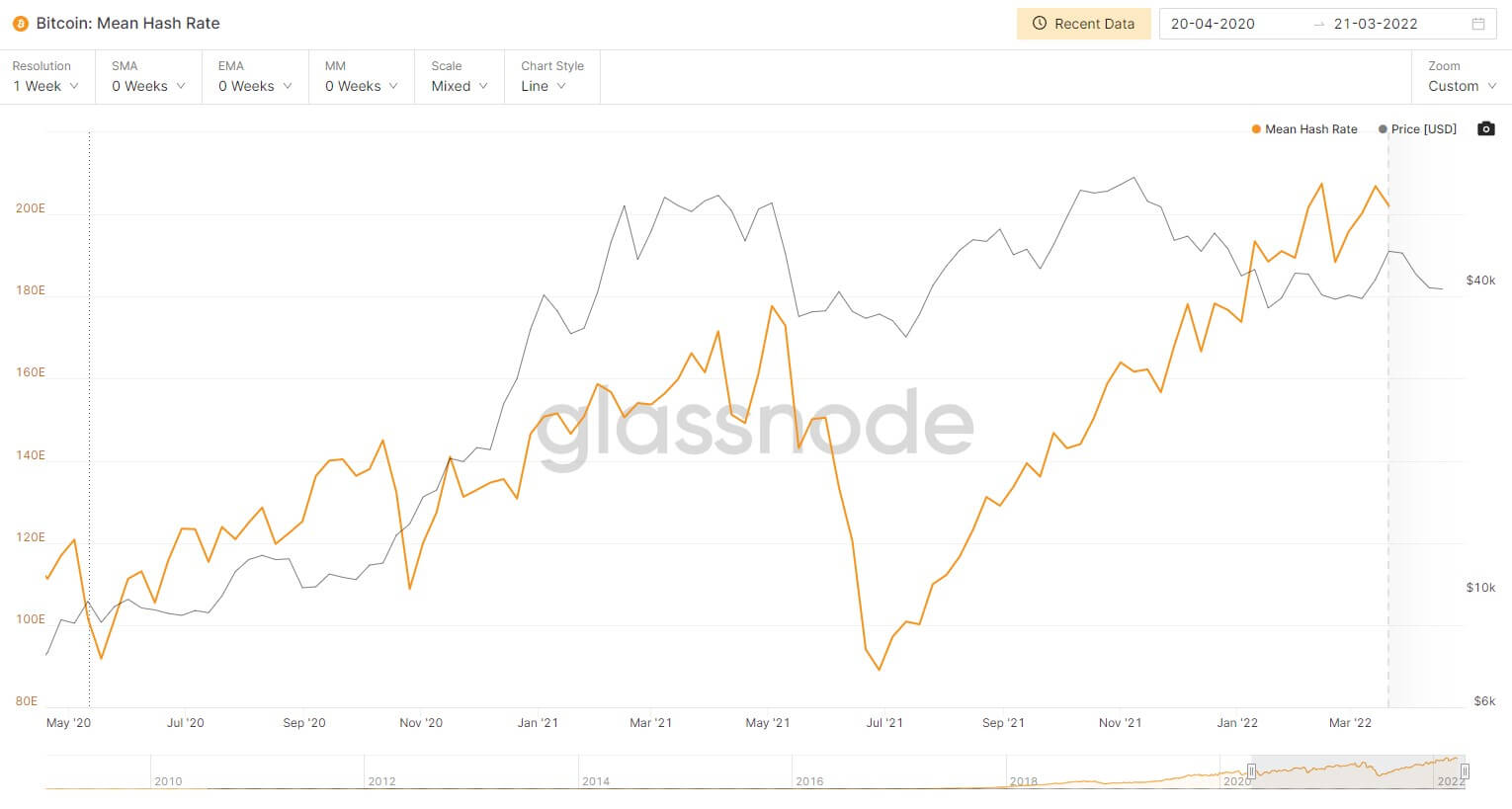 Markets do not panic if the hashrate drops because there is an in-built safeguard in Bitcoin’s code called ‘difficulty.’ If the number of network participants drops, so does the amount of power required to mine a block. The same is true in reverse; if the amount of power added to the network increases, same does the difficulty. This stops attacks on the network due to a sudden influx in mining power or an unprecedented event, causing many miners to leave the network, as happened in China. Kevin Zhang, from leading Bitcoin mining pool Foundry, told CNBC after the Chinese crackdown on miners,

“As more hashrate falls off the network, difficulty will adjust downwards, and the hashrate that remains active on the network will receive more for their proportional share of the mining rewards,”

Further, Bitcoin difficulty hit an all-time high recently, and thus the amount of power required to mine a block increased. The more computing power added to the network, the more difficult it becomes to mine a block. This is a mechanism built to ensure that Bitcoin’s supply remains constant. Because of this, we know that it will take over a hundred years to mine the remaining 2 million Bitcoin. However, as Samuel Becker from Sofi Learn explains, “as Bitcoin mining becomes more difficult, the process eats up more electricity.”

Participation and revenue from Bitcoin mining are expected to rise over the next few years to hit $4.5 billion by 2026. An increase in miners will increase the difficulty and thus reduce the Bitcoin reward per hash. Currently, the reward per 100TH/s is 0.00042199BTC per day ($16.20) without considering the electricity costs.

Their 2021 annual information reported that “the only seasonality that the Company experiences is related to potential changes in electricity prices based on volatility in market natural gas prices, which affects all of Hut 8’s facilities.”

Natural gas prices have been up 100% since December 2021, while the price of Bitcoin is down 25%. The cost of fueling mining operations has gone up 100% (assuming this cost has been passed on to the miner), while the return dropped by 25% when valued in dollars.

Further, Hut8 states that in the risk factors attributed to their business model, “The Company may face risks of disruptions to its supply of electrical power and an increase of electricity rates.” However, they list several agreements in place, indicating that fixed-price contracts have been put in place to mitigate this risk. Another large miner, Marathon, also states in their annual report that they pay a fixed cost of $0.042 per kWh for their electricity consumption.

Thus, it seems likely that the major miners who operate, in part, to help secure the network have fixed-priced energy contracts in place that will not put them at risk of bearing the increased cost of energy reported by the World bank. However, there is still a risk that the energy companies themselves may not be able to honor the agreements, as we saw several UK energy companies went bust in 2021.

Regardless, it would take a doomsday scenario for Bitcoin miners leaving the network to have any real impact. If losing 65% of Bitcoin mining power in 2021 was just a speed bump, then it is likely that an energy crisis would have a similar effect.

Natural gas prices were currently at the highest level since the creation of Bitcoin, yet in 2008 the price was 100% higher than it is now. Lastly, according to Ark Investments, 76% of Bitcoin’s mining power comes from renewable energy. The sun and wind don’t care about global economic unrest, and neither will the production costs for renewable energy miners. The only miners who look to be affected by an energy crisis are individual, private miners who rely on the traditional energy grid. Anyone mining Bitcoin at home with an ASIC miner may need to move to renewable energy or incur high costs in the coming 24 months.