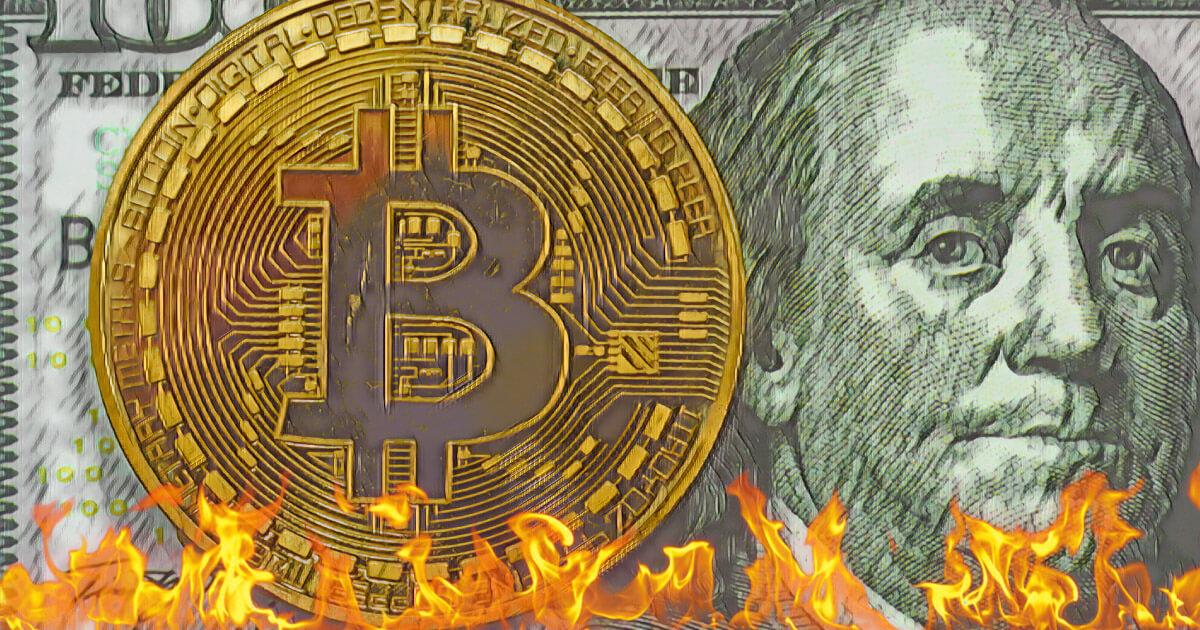 Some US banks have restarted their outrage against Bitcoin even as others have warmed up to the asset in the past year.

Bitcoin’s infamous price gyrations are known to polarize. The asset, like most other cryptocurrencies, can move by several percentage points in a single day—a stomach-churning experience for those using BTC as an “investment” and otherwise used to trading stonks.

Such movements may not affect the average crypto investor with less than $10,000 in overall holdings. However, when that magnitude reaches millions of dollars, it’s either risk-seeking hedge funds or individuals taking the BTC plunge.

MicroStrategy has purchased approximately 314 bitcoins for $10.0 million in cash in accordance with its Treasury Reserve Policy, at an average price of approximately $31,808 per bitcoin. We now hold approximately 70,784 bitcoins.https://t.co/zMJSH29bmC

Last year, as BTC moved from under $4,000 to over $41,000, banks and financial institutions spoke high and wide of Bitcoin as a one-size-fits-all macro hedge or even as an alternative to gold.

Banks like JPMorgan and Morgan Stanley (despite being known Bitcoin skeptics) said the asset class is likely to attract ‘hundreds of billions of dollars’ in the coming years, asset management firm Fidelity said it expected family offices to eventually start piling Bitcoin, while mutual fund giant MassMutual invested over $100 million in BTC last year, calling it the “first step” towards possible future plans.

But despite the recent cheers, some banks seem to hold their opinion of Bitcoin in tandem with the asset’s price movements: The recent price crash in the past few weeks has seen some banks starting their onslaught against Bitcoin once again.

A report released by Bank of America last week said Bitcoin remained an overvalued asset and called it the most “crowded trade” in current times. The bank even said Bitcoin was in a bigger “bubble” than most tech stocks—the latter of which have seen their own run last year, with electric carmaker Tesla zooming from under $200 in 2019 to over $800.

“D.C.’s policy bubble is fueling Wall St’s asset price bubble….When those who want to stay rich start acting like those who want to get rich, it suggests a late-stage speculative blow-off:” Bank of America strategists led by Michael Hartnett wrote in a note today

Then came a survey commissioned by Deutsche Bank, which saw 90% of respondents say that the most “extreme” bubble was Bitcoin, with 50% of all survey participants giving it the maximum of 10 points on a 1-10 bubble scale.

In terms of a long-term outlook, respondents said both Bitcoin (and stocks like Tesla) were likely to halve in price than double in value.

Such outlooks came despite an expected 92% higher global inflation over the next year—a record high; one that Bitcoin seeks to hedge against—with 71% of respondents stating the U.S. Federal Reserve was expected to continue to print more money to allow the markets to continue to grow.

The latest of such caution letters came yesterday after UBS economists told clients that Bitcoin wasn’t even an actual currency. “People are unlikely to want to use something as a currency if they’ve got absolutely no certainty about what they can buy with that tomorrow,” said UBS economist Paul Donovan.

Amazing what passes for financial “advice” these days. #Bitcoin https://t.co/w3RC1jYORh

But in a world of incessant money printing and inflation, do such arguments even hold a place anymore?