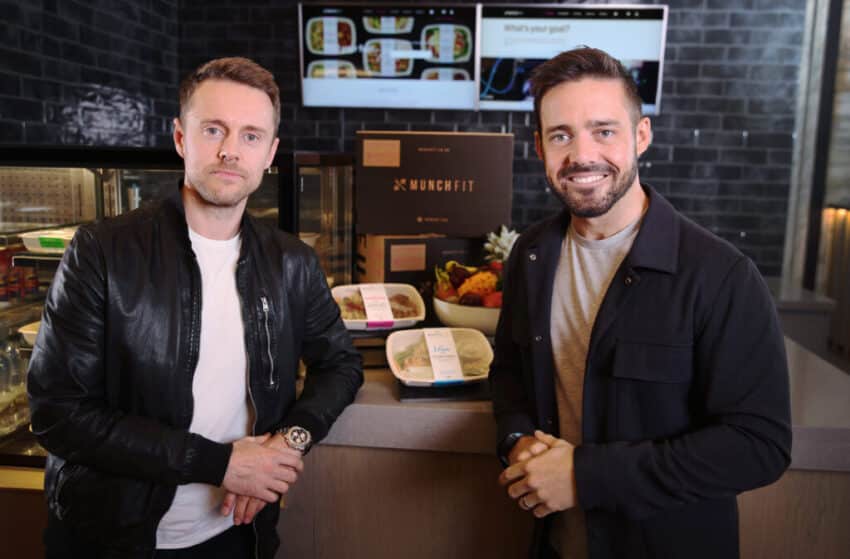 MunchFit, healthy food provider to luxury gym Equinox and elite studio Barry’s Bootcamp hopes to raise £1m through a crowdfunding round in a bid to satiate the growing appetite for meal plans tailored to fitness goals.

From humble beginnings delivering meals to a handful of customers in London, MunchFit – which was founded by Angus Fay in 2013 – operates a retail offering, fitness cafés and a meal plans service that allows people to order up to four meals a day, six days a week.

Helping to accelerate training results by taking the guesswork out of what to eat, the upmarket goal-based meals brand is looking for “Fitvestors” to take the business to the next level.

One of the “Fitvestors” is entrepreneur and angel investor Spencer Matthews, who used the Fuel Lean Meal Plan to help him achieve his impressive Weight Loss Transformation for Men’s Health. Matthews took delivery of four meals from the Lean plan, three days a week. “Like many of us, I appreciate what healthy eating looks like, but simply avoiding junk food wasn’t going to cut it for the challenge ahead.” observed Matthews.

The premium delivery service, which prepares its meals in London-based kitchens, has placed £710k of shares with institutional investors and wealthy individuals, and is now seeking to raise a maximum of £1.1m in equity crowdfunding through Crowdcube, the UK-based platform, which goes live on Thursday 25 March.

Angus Fay, CEO and Founder, said MunchFit was looking for new shareholders for the fitness food brand, who would receive different perks based on their level of investment – from complimentary merchandise and meals, up to a body transformation where they can emulate Spencer Matthews’ success.

“Most of us have aspirations to be healthy, but lack of time is often the biggest obstacle to achieving our goals: scratch cooking healthy meals goes out the window in favour of grabbing something on-the-go. This means that no matter how hard we work out, if our diet isn’t balanced, we won’t get the results we want to see. Post-pandemic, there is an increasing appetite for high quality, health-conscious products –  and we’re confident that MunchFit can deliver more than healthy returns.”

In 2019, MunchFit inked a lucrative licensing deal with publishers Hearst to create Fuel for Men’s Health (and soon Women’s Health), bringing annual revenues to £1.6m – over six times the growth achieved in 2015.

In June 2020, with its cafés shuttered by the pandemic, MunchFit swiftly dealt with those setbacks by unveiling Meal Plans – a choice of Lean, Balanced, Strong or Green (plant-based)menus, delivering nationwide.

The new funds will be used to open five more cafés; launch their Fuel range into major supermarkets; improve the user journey through their website and ecommerce platform, and also make key hires to expand into new business areas and growth.

This would increase potential production by 400% per cent, according to Fay.

As a personal trainer, founder Angus Fay realised many of his clients struggled to eat well, so he asked a friend to whip up some simple, highly nutritious meals to compliment his client’s training program and steer them away from Prêt baguettes.

With just £500, a few kitchens and several chefs later, Fay launched MunchFit in 2013, quickly picking up lunch and breakfast orders for corporate clients, and the company grew quickly.

Soon MunchFit was stocked in Planet Organic with a dedicated organic line, and the following year released in Ocado, who currently stock a careful edit of tasty, nutritious gourmet meals priced at £9.99, such as Teriyaki Salmon, Moroccan Beef Burgers, Korean BBQ Tofu Steaks and Tunisian Lamb Meatball Tagine. MunchFit has since added Amazon Fresh, As Nature Intended, BXR and Soho House as outlets.

Unlike recipe boxes which require scratch cooking, MunchFit’s gourmet meals require zero preparation. “Whether you simply want to get in shape,or are training for a half marathon or even the Marathon des Sables, MunchFit will help achieve those goals” concluded Fey.

“The decision to invest in MunchFit practically made itself. The results from using the meal plan for just a few weeks were mind blowing.” said investor, Spencer Matthews

“When a product works that well it’s hard to ignore. Also, having met Angus, I believe in his plan and his ability to deliver it.”

On the talent side, the MunchFit team consists of tastemaker Jamie Cairns, Executive Chef, who has more than 25 years of experience between Michelin star restaurants, high-volume production environments, and quality catering companies like Rhubarb.

Boasting a strong appeal with busy, fitness conscious individuals, those looking for a calorie controlled or gluten free diet, and the increasing numbers who are bored of repetitive home meals, the crowdfunding campaign seeks to raise at least £1m.