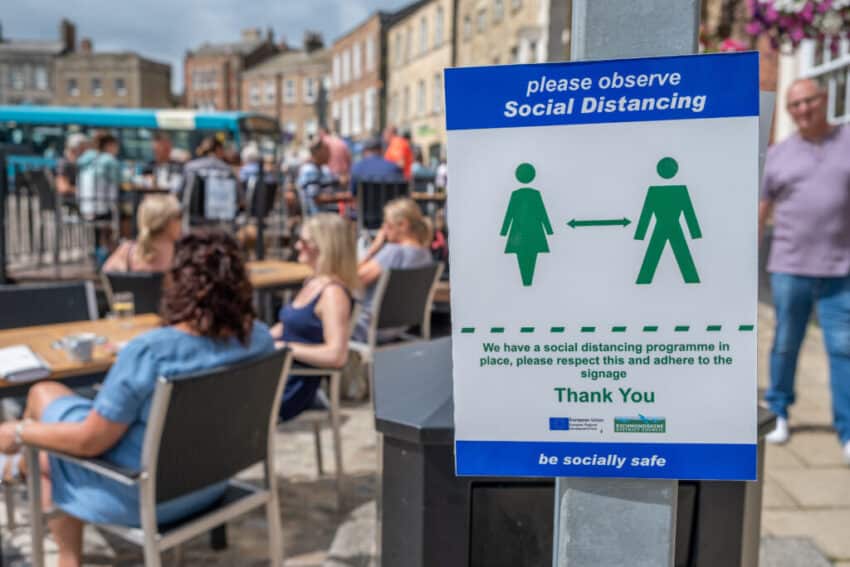 The “one-metre plus” social distancing rule is still on course to be scrapped next month, Boris Johnson has told Conservative MPs.

He said it was the “single biggest difference” the government could make to help pubs get back on their feet and that he was determined to remove the restriction on June 21.

Pubs, bars, restaurants, theatres and cinemas have warned that they will remain financially unviable until the rule is removed. They have been legally required to keep customers at least a metre apart since last July, forcing many hospitality businesses to remain shut throughout the pandemic.

Plans to end social distancing measures next month were put in doubt this week after cases of the faster-spreading Indian variant rose. The prime minister shelved an announcement of an end to restrictions, which was due to be made next week.

However, at a meeting of the 1922 Committee of Tory MPs on Wednesday evening, Johnson said he was still confident of removing the one-metre rule next month.

He told them: “We are hopeful we can do that at the end of the road map.” Johnson said that it would depend on the data “continuing in the right direction”, another sign that the Indian variant is less of a threat than first feared.

An MP who attended Wednesday’s meeting said: “He seemed very upbeat about removing the one-metre-plus rule next month. He told us he fully realises that it is the biggest difference the government can make to letting pubs serve customers in reasonably normal conditions and that means getting rid of any capacity restrictions.”

The MP added that backbenchers were buoyed by Johnson’s comments but they feared that the plans could yet be scuppered by Matt Hancock, the health secretary, and scientific advisers.

The prime minister’s comments were welcomed by pub chiefs last night. Emma McClarkin, chief executive of the British Beer & Pub Association, said: “Given pubs are financially unviable under the current restrictions they face, being able to reopen without any restrictions at all from June 21 is going to be vital to their survival.”

Yesterday Downing Street said it was “still too early” to determine whether the Indian variant could delay lifting all coronavirus restrictions on June 21 but that there had “not been any significant changes” in the past 24 hours. A final decision will not be made until June 14.

The prime minister’s spokesman said: “At the moment we are keeping a very close eye on the data. There is still, similar to yesterday, not been any significant changes that currently suggest we need to change our course of action. We are monitoring that very carefully but it is still too early to make a definitive judgment.”

Last week Johnson raised fears that the lifting of restrictions would be delayed after he said the Indian variant could cause “serious disruption”.

However, Professor Andrew Hayward, a member of the government’s Scientific Advisory Group for Emergencies, said he was “very concerned” about the Indian variant and believes the UK could be at the start of a third wave. He said the restrictions might have to last longer to contain the spread of the strain.

New real-world data has shown that two doses of the Oxford-AstraZeneca vaccine will prevent 85 to 90 per cent of symptomatic cases, a similar figure to the Pfizer-BioNTech vaccine. The data shows that its efficacy builds after the 12-week dosing gap, during which one dose stops 55-70 per cent of infections.

Mary Ramsay, head of immunisation at PHE, said that the findings showed how important it was to return for a booster. “Each vaccine dose delivered helps us prevent lives being lost and people becoming seriously ill.”