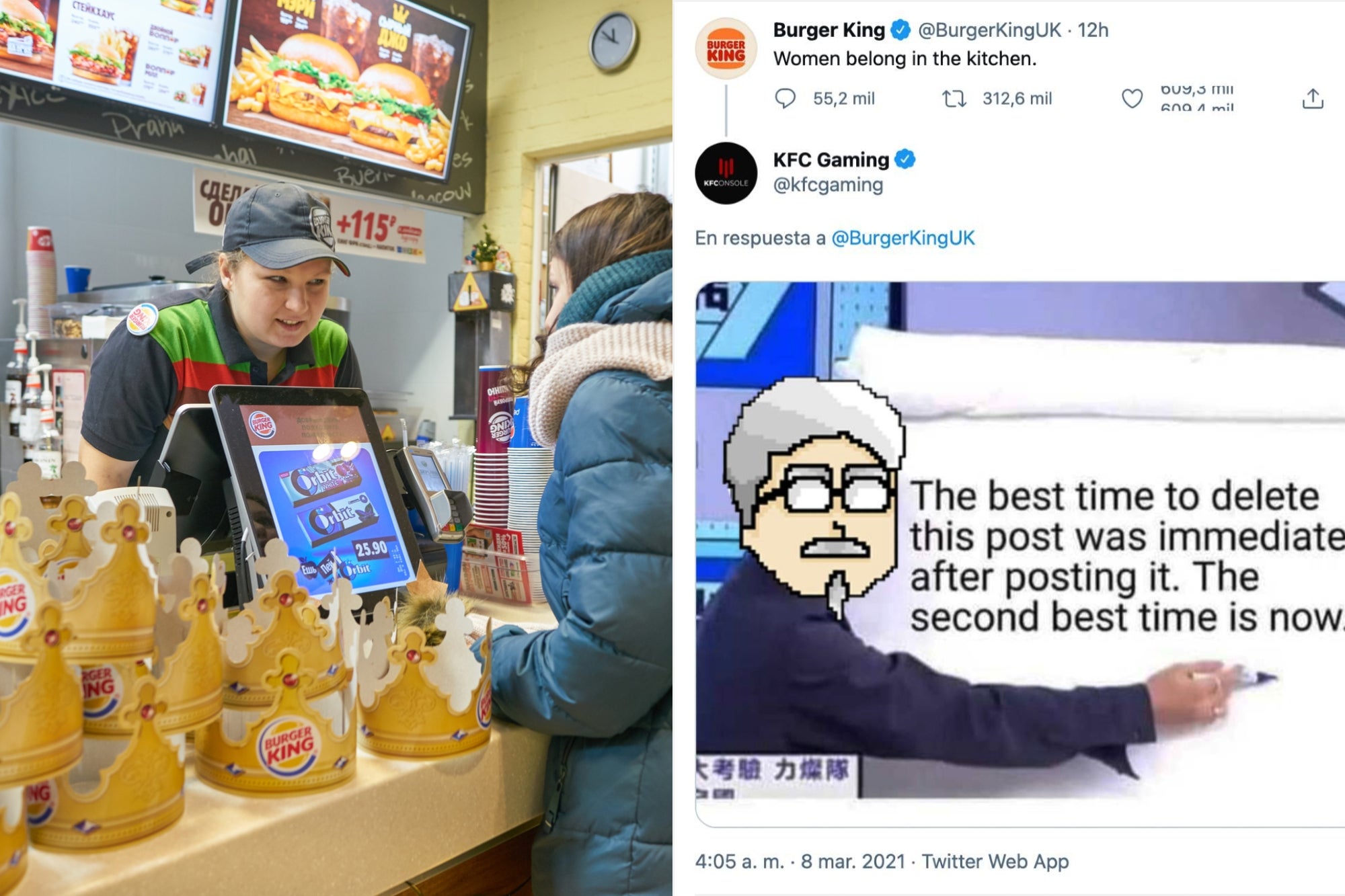 Today, March 8, International Women’s Day is celebrated, commemorating the struggle of women for equal rights. In the interest of joining the commemoration, many brands speak out in favor of social movements, however, sometimes they do not do as well as they hope.

Within the framework of this day Burger King United Kingdom tweeted “women belong to the kitchen”, the tweet is accompanied by a thread with two more messages where the fast food company explains that it is launching a scholarship program to encourage female employees to pursue a culinary career and reduce the gender gap in this sector.

Women belong in the kitchen.

“We are on a mission to change the gender ratio in the restaurant industry by empowering female employees with the opportunity to pursue a culinary career,” she says in the following tweet.

However, many users were left with only the first message, yes, the one that says that ‘women belong to the kitchen’ and Twitter burned.

“Someone who works at Burger King saw this and really thought it was a good idea,” says a user of the social network.

“Shout out to Burger King for damaging what could have been a fabulous tweet on behalf of women because they couldn’t help but make an outdated joke that men often use. However, happy International Women’s Day: D, “commented Hannah Rutherford, youtuber and Twitch streamer.

Shoutout to Burger King for absolutely fucking what could have been a fabulous pro-women tweet because they couldn’t stop themselves making an outdated joke often used by men.

According to Fast Company , the message was adapted from a full-page ad in The New York Times , created by DAVID Miami agency for the US market, which put the headline and context in the same place.

Only 24% of chef positions in US are occupied by women.

That’s why the BK Foundation launched a culinary scholarship program to bring more women to leadership positions in the industry.

Women belong in the kitchen if they want to work there. And hopefully in leadership roles. pic.twitter.com/ITwnTJQpDp

“Only 24% of chef positions in the US are held by women.

That is why the BK Foundation launched a culinary scholarship program to bring more women to leadership positions in the industry.

Women belong to the kitchen if they want to work there. And hopefully in leadership roles, ”reads the message from Fer Machado, global marketing director for Restaurant Brand International (parent company of Burger King, Popeyes and Tim Hortons).

Machado told Fast Company that it is difficult for the brand to apologize “because the whole message was actually published.”

The executive also explained that they were discussing it, but that it is “a real shame it gets lost in the UK conversation. In the end, the intention behind what we are doing here is really good. And all of this is more than an ‘ad’ or a ‘tweet’ ”.

On the other hand, he added that they analyze their messages very well before launching them in different media and countries so that the intention is reflected in the best way, although they are always learning and trying to do better.

KFC Gaming responded to the hamburger brand with an image, which shows the pixelated face of a Colonel Sanders edited on a body pointing to a blackboard that says: “the best time to delete this post was immediately after it was done. The second best moment is now”.

To which Burger King replied: Why would we delete a tweet that is drawing attention to a major lack of female representation in our industry, we think you would agree with this too? We have launched a scholarship to help more of our female employees have the opportunity to pursue culinary careers.

Why would we delete a tweet that’s drawing attention to a huge lack of female representation in our industry, we thought you’d be on board with this as well? We’ve launched a scholarship to help give more of our female employees the chance to pursue a culinary career.

To the response of the hamburger restaurant to KFC Gaming another user placed: “I don’t know, probably because you are attracting and validating conspiracy theorists of the sexist right …”, referring to another series of messages from users that validated the position of the first Tweet.

So far there has been no public apology or other manifestation of the fast food brand.