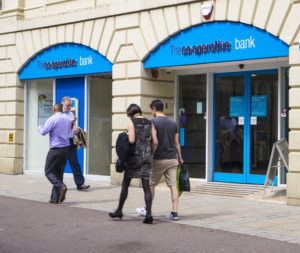 The Co-operative Bank is to cut 350 jobs and close 18 branches across the UK, as it battles against low interest rates and the economic downturn sparked by the Covid-19 crisis.

The job losses represent about 11% of its 3,175 staff, and will mainly affect head office and middle management roles as well as workers at the branches earmarked for closure.

The job cuts and branch closures – which were announced to staff on Monday evening and Tuesday morning – will take effect by year-end.

The lender, which has been 100% owned by a group of hedge funds and private equity firms since 2017, blamed the economic impact of the pandemic and lower income after the Bank of England cut interest rates to 0.1% in March.

The move to cut jobs and close branches comes nearly a month after the Co-operative Bank reported a £44.6m first-half loss, which included a £11.2m hit due to the impact of Covid-19.

Its chief executive, Andrew Bester, said: “We’re not immune to the impact of recent events, with the historically low base rate affecting the income of all banks and a period of prolonged economic uncertainty ahead, which means it’s important we reduce costs and have the right-sized operating model in place for the future.

“At the same time, we are responding to the continuing shift of more and more customers choosing to bank online, with lower levels of transactions in branches, a trend which has been increasing for some time, across the banking sector and more broadly.”

However, Bester said the bank was in a “resilient position” and would continue to support customers through the crisis.

The bank has now launched a staff consultation and said it will try to redeploy workers where possible. “We will do all we can to support colleagues through the process with fairness and respect,” Bester added.

But Unite said it was deeply disappointed by the bank’s decision. “Job losses are always unwelcome. However, given the repeated restructuring exercises that this workforce has been through over the past 10 years, the news today will be particularly painful,” the union said.

The 18 branches proposed for closure are: