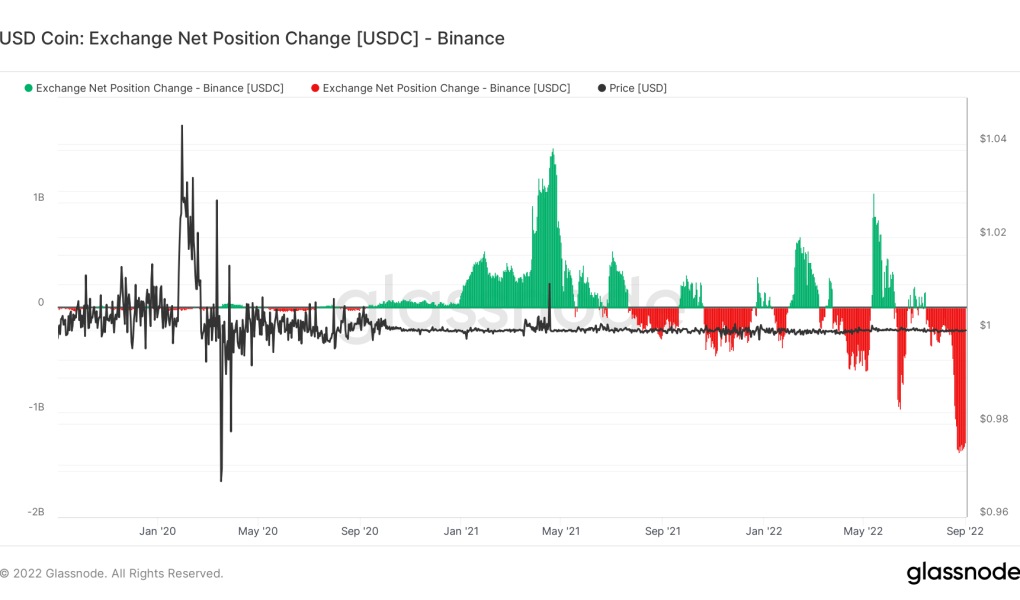 The biggest news in the cryptoverse for Sept. 1 includes Michael Saylor disagreeing with allegations of tax avoidance, U.S. probing Binance over AML compliance since 2020, Celsius asking to return $210 million to creditors, and OpenSea supporting only NFTs on PoS post-merge.

Following the tax fraud case filed against Bitcoin Maximalist Michael Saylor on Aug. 31, he has issued a statement claiming that he has no tax liability to the District of Colombia since his residence is in Miami.

The lawsuit had earlier stated that Saylor deliberately claimed to be a resident of lower tax jurisdictions like Miami so as to avoid paying taxes to the District where he reportedly has “multiple yachts” and a luxury penthouse.

Saylor said in a statement:

“I respectfully disagree with the position of the District of Columbia, + look forward to a fair resolution in the courts.“

Analysts at Paradigm weighed the difference between ether’s spot and future prices and arrived at a prediction that the Ethereum POW token may trade at $18 post-merge.

It added that ETHPOW would be priced at 1.5% of ETH’s current market cap given that ETH holders currently have a neutral bias toward the futures market.

Babylon Finance to shut down Nov. 15 after failing to recover from Rari/FEI hack

Months after Babylon Finance suffered an $80 million hack, the protocol has announced it will shut down operation effective on Nov. 15.

The effect of the exploit was compounded by the declining market conditions. Consequently, users have exited 75% of the assets locked in the protocol.

The announcement caused the BABL token to crash 92% after dropping from about $5 to as low as $0.218, as per Congecko data.

A new group of creditors has filed a lawsuit against Celsius seeking repayment of $22.5 million.

The creditors stated that their funds were held in the custodial account and are redeemable based on the agreed term of service.

The creditors have urged the court to allow Celsius to reimburse their withheld assets.

Celsius wants to return $210 million worth of custody assets

Due to the growing filings by aggrieved creditors, Celsius has filed a motion seeking the court to allow eligible customers to withdraw up to $210 million from the platform.

The crypto lender confirmed that the affected assets are properties of the customers and not part of its bankruptcy estate.

OpenSea announced it will only support NFTs on the proof-of-stake version of Ethereum immediately after the merge.  Consequently, it will cease trading ETHPoW NFTs on its platform.

CryptoSlate’s recent macro analysis reveals that the Fed’s plan to release $35 billion as mortgage-backed securities (MBS) in its effort to curb inflation may lead to another housing market collapse.

Private investors can add up MBS to the portfolio which helps take out money from the economy and expectedly reduce inflation. With mortgage payments 75% higher year-over-year, many people may default on their payments leading to an oversupply of houses and monetary loss for MBS investors.

When housing supplies become excessive, a new housing crisis may occur which would drag financial markets down including cryptocurrencies.

However, with expected currency devaluation in the event of a housing crisis, many people may turn to “hard assets” like crypto to preserve their wealth.

On-chain data analyzed by CryptoSlate reveals that an average of $1 billion worth of USDC left Binance’s hot wallet this week, which is consistent with the market trend. 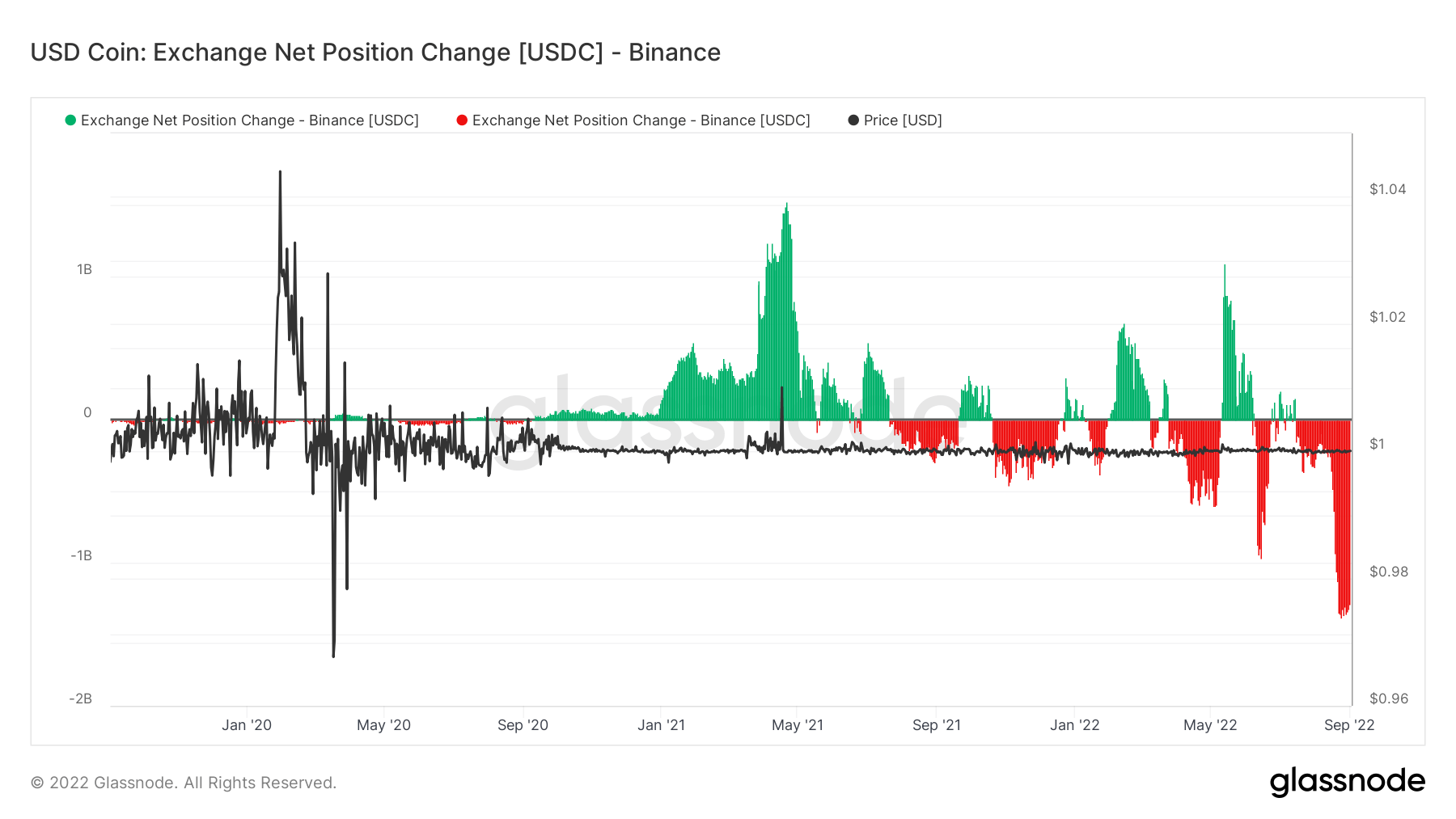 Further analysis of stablecoin withdrawals across other exchanges, shows that there has been a significant decline in stablecoin balances generally.

Premier stablecoins USDT and USDC, which make up 12% of the total crypto market cap, have been battling for dominance in recent weeks.

In a period where USDT lost over $16 billion in market cap, USDC reportedly grew by $4 billion. The heat of the market downturn in August forced the tokens to reach their local low.

However, the two stablecoins are recovering from the fundamental stories that contributed to their decline. They are witnessing a resurgence in their crypto market dominance which has boosted by 40% in the past few weeks.

News from around the Cryptoverse

U.S. prosecutors have been investigating Binance since 2020 on measures it has adopted to ensure anti-money laundering and sanctions compliance, Reuters reported.

Binance CEO Changpeng Zhao in a tweet stated that the exchange met all of the regulator’s 2020 demands.

Another story today about a crypto company receiving an inquiry from a regulator. A request to VOLUNTARILY share certain information back in 2020, which we did. Important for the industry to build trust with regulators.

The Financial Accounting Standards Board (FASB) will not include NFTs and some stablecoins in its crypto accounting review, The Wall Street Journal reported,

The scope of the project would include assets that are not unique and interchangeable, and also intangible and do not contain contractual rights to cash flows, goods or services.

Users trading the ETH/BUSD pair will not be required to pay trading fees over the next one month.

Binance announced that the move is to attract both newcomers and veterans interested in the Ethereum ecosystem in anticipation of the upcoming Merge,

Cardano is now live on Robinhood

As anticipation for the Vasil hard fork mounts, Robinhood has announced users can start trading Cardano’s ADA token on its platform.

LG Electronics is reportedly launching its crypto wallet “Wallypto” in Q3 of 2022. Wallypto was built in partnership with Hedera blockchain.