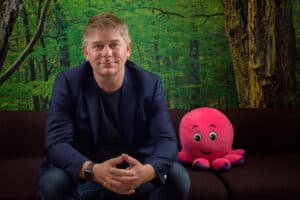 Part of our special series of csuite podcast episodes that we’re recording in partnership with the European PR Agency Tyto, Greg Jackson is CEO of Octopus Energy, which achieved unicorn status in the UK in May this year.

Greg said that becoming a unicorn CEO is something to be proud of, but the reality is that it is really just fuel for stage two of their mission – they want to decarbonise energy generation and transmission systems.

He said that they saw the opportunity to use technology to drive a dramatically more efficient system. Energy is the largest undisrupted sector globally and technology may be the key to helping make the switch to renewable energy sources faster and cheaper than anyone thinks. His proudest moment in this business was helping make the energy price cap happen.

He explained, if you focus hard on what you want to achieve, such as dramatically better customer service, dramatically greater efficiency and the fight against climate change, in the case of Octopus Energy, you have a good chance of achieving it.

Greg said that in every sector, as it went through that digital revolution across the early 2000s, people said “it’s not going to happen to us”. Many people believed that technology won’t matter in the energy sector. However, bringing in technology where it is almost rejected has been a huge opportunity for Octopus Energy.

Greg said that one thing you learn when you’re building tech is that tech can do anything, but at Octopus Energy, they’re not going to have every knob and whistle, but they will focus on creating astonishing user experiences and real digital innovation on what matters for decarbonisation.

Greg stated that their job is to use technology to drive better value, fairer pricing, better service and the Green Revolution. Therefore, if things are not consistent with that, they’re quite low down the priority list.

It’s a very flat structure in the business, where managers don’t say to middle managers or teams of product developers, go and build a 500-page deck.  They actually get their hands dirty meaning that they maintain a consistent focus throughout every level, even if there aren’t many levels.

Greg explained that the last thing they wanted to do was go out there trumpeting the unicorn status and instead be very cognizant that this is a long-term mission – you can’t declare any level of success while you’re still in the game.

Greg likened the energy sector to a Godzilla movie poster, in that Octopus Energy were the little guys in the street in Manhattan and you’re looking up at the skyscrapers which are the big six, but behind the skyscrapers, you could actually see the real threat, which is societal changes.

He explained that if you’re working somewhere because you want to deliver the thing that really matters, you’re going to do a better job and you’re going to do it with more joy.  Therefore, by getting all the teams to work together, they have a self-reinforcing cycle of elevating the internal user to godlike status, and it’s their job to serve.

Greg said they have got to be humble because it can all go wrong tomorrow. They achieve this through an absolute constant focus on what are the things that are working and not working organisationally, because if they get the organisation right, if they get the people right, the business will follow. For example, having a super high bandwidth communication so every customer and team member can get hold of every director.

Greg admitted that he has always been good at talking, but he had to learn to listen, you are never going to be able to deal with a problem effectively if you are going to wind each other up. He said that hardest thing you ever do, is giving people bad news, it’s remembering it’s about them. Communications is actually about hard truths being better in the long run than easy evasions or even mistruths.

On the impact of COVID, Greg said the first thing is really recognising the impact on so many people in the population, including those within their own team, who have been impacted by the virus. He added that they then have to recognise that this is the most unequal thing he has ever seen happen and cannot assume the impacts of COVID have been the same on everyone. He said they are trying to ensure that they focus on helping those who truly need it most and recognise that some people are actually better off. They are working hard to drive this kind of united, ‘we’re in it together’ recovery, driven by investment in a green future. Even in energy, electricity generation in the UK has never been greener.

In the very short-term, a potential economic downturn could have a detrimental effect on the environmental agenda, in the medium to long term, there’s still so much private capital available and so Greg said that we just need to unlock it into green investment. He explained that education is good if it generates pressure on politicians and companies to change the rules and change the things they create is very effective

Greg wants to get to a world where he’s not selling gas but create policy frameworks and economic models that will enable governments and companies to adopt systems that drive the move to renewables faster.

Octopus Energy is a start-up, which means that they didn’t have to retrofit purpose and mission into their company, Greg explained that if you want to create real value, focus on the fundamentals.

Talking about diversity is an incredibly important area, and Greg emphasises the importance of culture; How can you build a culture where everyone feels free to be successful when they look up the company and no one looks like them? He said that what was highlighted recently by Black Lives Matter, was that there are no black or brown faces in the leadership team. It is a complex area, but he thinks what happens with start-ups is whoever you start with, that’s who you’re stuck with at the beginning. It’s what you do thereafter that really matters.

Greg believes that the stale old ideas of energy companies, that they are just a commodity no one cares about, it’s just lazy thinking and the opportunity to differentiate in this space is huge. He hopes to build a really positive vision of the future for his company and for society.