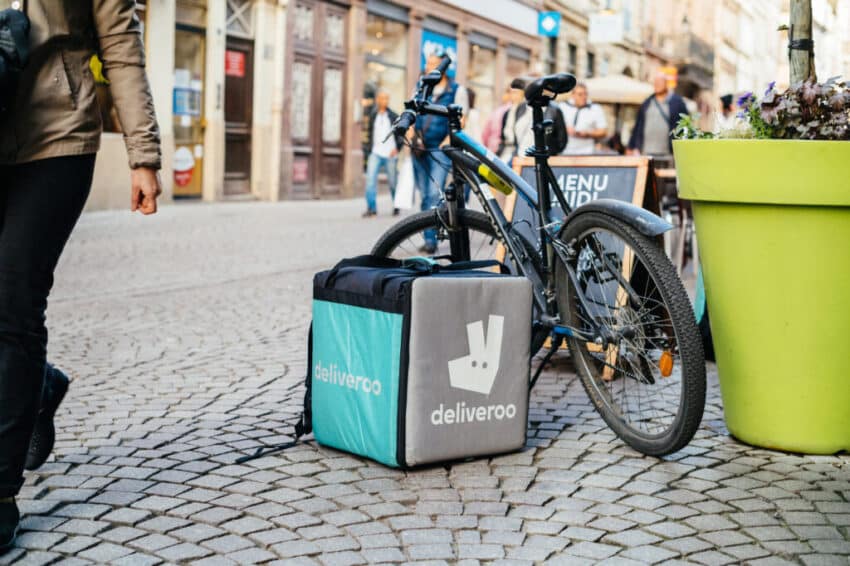 Deliveroo pressed the start button today on a $7 billion-plus listing on the London Stock Exchange less than a year after it had warned the Competition and Markets Authority that it would go bust without a $500 million investment from Amazon.

The food delivery firm’s decision to opt for London over Wall Street came the day after the chancellor backed recommendations for the relaxation of listing rules that are regarded as a barrier to technology companies choosing London over New York, Amsterdam or Asia.

The recommendations in Lord Hill of Oareford’s listing review, including a dual share structure, have yet to be implemented, the shift in attitude implied by the proposed changes is believed to have been a big factor in Deliveroo’s choice of stock market.

Deliveroo, founded in 2013 by Will Shu, a former Wall Street analyst, and Greg Orlowski, has become well known in Britain for its workers delivering food on bicycles with brightly coloured backpacks adorned with a kangaroo logo. The company works with more than 115,000 restaurants in 12 countries and has 100,000 riders.

In May 2019 it announced a $575 million fundraising round led by Amazon, valuing it at $4 billion, then in January this year, before the IPO, it raised another $180 million from existing shareholders, led by Durable Capital Partners and Fidelity, in a funding round valuing it at more than $7 billion.

In April last year, despite its concerns over the influence that Amazon would wield over Deliveroo, the CMA provisionally cleared the purchase of the 16 per cent stake, saying that it had become clear that the pandemic was having “a significant negative impact” on Deliveroo’s business owing to the closure of a large number of the restaurants available on its website.

The competition watchdog, which conceded that it was a “wholly unprecedented” situation, said it had been informed by Deliveroo that this meant that it would “fail financially and exit the market without the Amazon investment”.

In an even more bizarre turn of events the CMA later changed its mind on the provisional clearance after submissions from third parties and concluded that the delivery firm’s position was not as parlous as previously thought because of a rise in lockdown orders. Then in June it provisionally cleared the investment for the second time, this time because it had concluded that it was “not expected to damage competition in either restaurant delivery or online convenience grocery delivery”.

In line with Hill’s recommendations Deliveroo said that it was planning a dual-class listing of shares in which Shu’s stock would have greater voting rights than ordinary shareholders. This is regarded as controversial in London because of the threat that founding shareholders could take decisions that are not in the best interests of the wider shareholder base, but it is common in the US, Hong Kong and some European bourses.

Deliveroo said that the dual structure would be limited to three years, in line with Hill’s review proposals, which the delivery group said would “ensure the stable execution of management’s strategy and enable them to continue to focus on ambitious long-term growth plans”.

Hill said: “One of the whole points of our listing review was to encourage more of the growth companies of the future to list in London. It’s obviously great news that Deliveroo, a global technology leader, born and bred in the UK, has chosen to list here. The changes we recommended would make it easier for more companies to follow Deliveroo’s lead, sending out a message that London is open for business.”

The statement on the proposed structure surprised some observers, however. William Wright, founder of New Financial, a think-tank promoting capital markets, said: “The FCA [Financial Conduct Authority] may be surprised to hear that Deliveroo is planning to list in London with a dual-class share structure as a result of the Hill review, given that the rules haven’t changed and the FCA hasn’t started its consultation on changing them.”

In its submission to the Hill review the FCA pointed out that dual-class share structures were “already permissible in any form in London on the main market as far as the FCA is concerned provided that a standard listing is sought by the issuer”. It added that the structure would have to be approved by both the Takeover Panel and HM Revenue & Customs.

Rishi Sunak said that the necessary reforms would be implemented. “The UK is one of the best places in the world to start, grow and list a business and we’re determined to build on this reputation now we’ve left the EU,” he said. “That’s why we are looking at reforms to encourage even more high growth, dynamic businesses to list in the UK. So it’s fantastic that Deliveroo has taken this decision to list on the London Stock Exchange.

“Deliveroo has created thousands of jobs and is a true British tech success story. It is great news that the next stage of their growth will be on the public markets in the UK.”

Oliver Dowden, the digital secretary, added: “The UK is a global tech capital and the firm is one of our great success stories. With our plans to revamp listings rules and back the nation’s great innovators with infrastructure, skills and R&D spending, we are determined to make the UK the natural home for tech IPOs.”

Deliveroo gave no guidance on the timing of a potential IPO, confirming only that it had “selected London as the venue for a future listing”, although an intention to float announcement is expected shortly. It said the choice of London “underlines Deliveroo’s commitment to making the UK its long-term home”.

Having bounced back from last year’s near-death experience, it said that 2020 had turned out to be “a year of growth” and it had been profitable for more than six months at the operating level.

Professor John Colley, Associate Dean of Warwick Business School and an expert on tech firm IPOs, said: “This valuation of Deliveroo seems excessive for a business which is still many years from profit, especially given that some hold significant doubt whether the home takeaway delivery model can become profitable outside of London.

“Indeed, the sole basis for this valuation appears to be the immense amounts of cash looking for growth technology stocks.

“Bear in mind the recent Supreme Court finding that Uber drivers are ‘workers’ and have certain rights such as paid holidays and pensions. This finding may well apply to takeaway home delivery too, driving up their costs.

“Ultimately Deliveroo will have to charge customers and restaurants far more to make a profit, but that brings its own difficulties. For restaurants, margins are already narrow. And at what price do customers simply decide to collect their own meals?

“Potential investors should also remember that if this listing is under new stock market rules, it may well be accompanied by founder share rights. That means if the company is badly run there is little shareholders can do to change the board.”

Its main advisers on the IPO are Goldman Sachs and JP Morgan.