Sometimes the passion for something, be it tangible or intangible, takes us to places that we only saw in our dreams. Raúl Zambrano, a computer systems engineer from Tepic, Nayarit, discovered that he wanted to create a product that would become a symbol of his place of origin.

After working seven years in his professional area, this young entrepreneur ventured into digital marketing, photography and creating web pages, at this time Zambrano met a girl, who hired him to create a catalog of Nayarit products. Later, that job would take him to an international expo in Guadalajara, where he would find his passion.

“It all started in 2012 when I was working with this girl and she told me ‘we are going to go to an expo in Guadalajara’. I went with the posters and the canvases that we had made to decorate the stand . When we got there I realized that this stand was made of Nayarit products and it gave me a lot of emotion to see the businessmen who were there representing Nayarit ”, commented Raúl Zambrano in an interview with Entrepreneur in Spanish .

For Zambrano, it was a pride that his state had a stand at that event, however, he realized that he wanted to feel that satisfaction of representing “his Nayarit”.

“When I saw them, I said, ‘I want to be and do like them’, that is to say, the fact of standing there in the name of my state and giving them something. And that was what motivated me. I said, I have to make a product, I have to also stop at an expo and give something to my place of origin ”, says the entrepreneur.

In this way Chumarones was born, corn churritos with shrimp, originally from Tepic, Nayarit. This brand has managed to position itself on the palate of the people of Nayarit and has had sales of around 350 thousand pesos per year.

Have you ever tried a shrimp squirt?

Mexicans like salty snacks, since according to a study conducted by Kantar Worldpanel , 7 out of 10 citizens consume this type of snack in the country.

Zambrano’s first investment, now known as Don Chumarón , “was very little.” According to the entrepreneur, he only spent on ingredients such as corn, a kilo of shrimp and “a small churrerita [churros maker].”

On the other hand, the young entrepreneur together with his family created the implements that he lacked. It should be noted that his father owned a carpentry and whatever the young man asked him he was willing to create.

“We set up our own machines, the first was with a washing machine that had a stainless steel tub and that served as a drainer. Then with a few elements like ‘iron’ we made a base and created a churrera with a boat of those that they use to make snow, [in which] we made holes. We also managed to build a small mill. All this did not take more than two thousand pesos, ”says Zambrano.

Although in its early years the family brand of Zambrano, achieved sales of 600 thousand pesos per year and was shaping up to continue growing “it has been a story full of thorns.”

After their success in Nayarit, they caught the attention of some investors. A friend of Raúl, who had no capital, but who had a father-in-law with a well-established company in Mexico City, told him about a partnership to take the Chumarones to the next level.

The decline of ‘shrimp churritos’

“And that’s where our decline came because people already got in, they started with ideas and I no longer had the flexibility to make decisions,” explains Zambrano.

According to the entrepreneur, the biggest failure was not having a clear business plan and starting to spend money on things they didn’t need at the time. The sales of the snack fell to the point that they did not even reach 100,000 pesos per year.

“We did not make a correct business plan, only the money began to be invested. That is, ‘he takes care of this, he takes care of the other’, they were unnecessary expenses and at the time of wanting to set a strategy and say, ‘well, let’s go to the supermarkets, we are going to make a distribution route’, the expense had been so great that there was no money to fix the old truck that I had to go and distribute myself. There were not enough resources to pay the rent because it had already been spent on industrial machinery. A very large production plant was built, offices were built that were not necessary, ‘restaurant’ sales points were made for the new product that were not necessary ”, he says.

Raúl Zambrano, lost interest and hope a bit, during 2015 and 2016, the entrepreneur dedicated himself to other things more fully, since he practically ran out of income from Chumarones.

The few results made his main investor lose credibility in him, and when he wanted to organize everything, it was the voices of four other people with whom he had to face, so they could not reach an agreement, so that partnership culminated .

“I summarize it in that it was very badly planned. At the beginning, everything was painted very beautiful, but later it didn’t work and when I tried it on my own, it turned out to be more fit, ”says Zambrano.

Here nobody gives up

Raúl Zambrano’s clients always asked him “Hey, do you have Chumarones?” and the young entrepreneur answered, “no, but I’ll do it for you right now.” In this way, the Nayarita explains that his consumers motivated him to continue with the idea and return to “take out the irons.”

“The first thing I did was to take out the old iron that I had and by that time I no longer had the washing machine. Here it is important to mention that my father had a carpentry shop and I told him, hey, I use this with these characteristics and he made me a stainless steel mixer that he built himself ”, he explains.

But, at that time he could not use the brand name ‘Chumarones’ since they had a license agreement for use with his previous partners, so he decided to sell his product in bulk, until with lawyers he managed to recover the name.

“We started from scratch in a small 4×8 meter factory and started selling again. Little by little I began to capitalize, but that was it, the feeling of not defeating myself, ”says Zambrano.

Do not forget that undertaking can be a seesaw

Zambrano quickly achieved an average of sales between 200 and 300 thousand pesos per year, which he used for reinvestment in industrial machinery. “I bought stirrers, sealers, churreras, so little by little with the reinvestments that I was generating was how I started to get up.”

However, then he wanted to enter a self-service store and “ventured” with a business that quickly consumed him because it did not achieve the required sales, this meant another “downturn”. “At this moment was when I learned the importance of having a capital,” he says.

At the moment, Chumarones is located in Tepic, Nayarit, with a sales strategy through social networks and some physical sales points in the Mexican state.

The young man comments that he began a distribution strategy with people interested in the product and in undertaking in other states of the republic, however, the pandemic hit that idea a bit, but it still stands.

A friend of Zambrano knew that the young man wanted to participate in Shark Tank México that airs every Friday at 9:30 p.m. on Canal Sony, and he insisted until he succeeded. 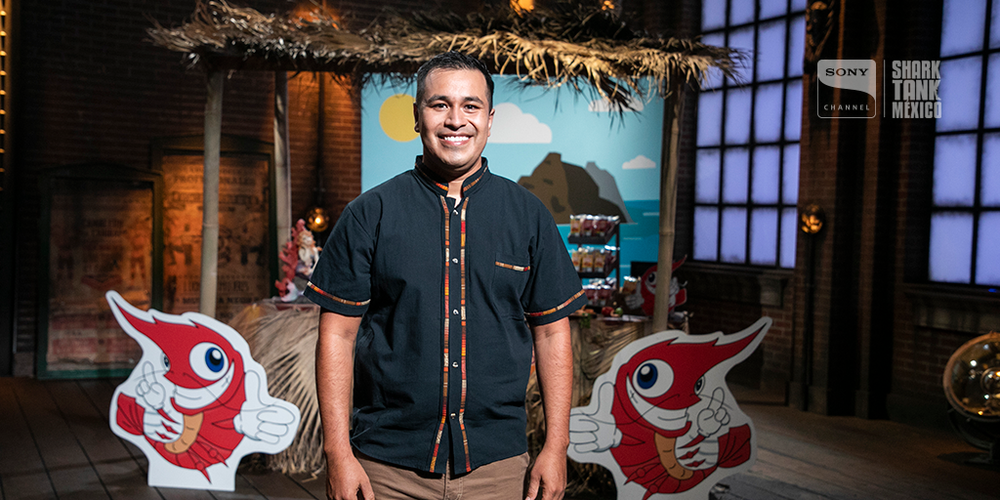 For his part, Raúl Zambrano followed the program’s format from its American version, and declares himself a fan of Kevin O’Leary, better known as Mister Wonderful. Likewise, he comments that when the show was released in Mexico, he also caught it and in the third season he tried to participate, but was unsuccessful since his brand was “still in its infancy.”

Later, for the current season, his friend sent him the league to register and what he never imagined happened, they called him to review his application.

“I entered the tank and it was like seeing your lifelong idols, I realized that dreams do come true,” he says.

Zambrano arrived at Shark Tank México asking for 400 thousand pesos for a 45% stake in his brand. However, none of the sharks wanted to enter the project.

“Actually what I was looking for was a strategic partner, who will help me penetrate the market, find a way to enter larger self-service chains and financing from them as well, that was my intention,” explains Zambrano.

At the moment, Chumarones wants to establish a network of distributors in different states, especially in the Pacific region in Mexico, “because they are people who have looked for me a lot,” says Zambrano.

In the future, Raúl will seek to diversify the flavor of Chumarones into products such as chips, a piece of toasted or fried corn tortilla.

How to surf the wave in the best Don Chumarón style?

As we have seen, the path of Raúl Zambrano has not been the simplest, for this reason the entrepreneur shares some tips to face a crisis: