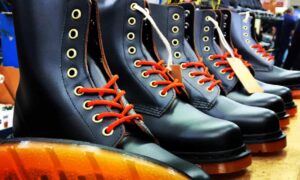 Dr Martens has repaid its furlough cash to the government as a result of strong trading during the lockdown.

The 60-year-old footwear brand, famous for its sturdy boots, said sales rose nearly 50% in the year to June, while the group’s profits nearly doubled.

Kenny Wilson, the chief executive, said it had been a year of “exceptional growth” and that he was confident of the outlook for the business despite difficulties caused by the coronavirus pandemic.

The company said it had claimed furlough payments under the government’s job retention scheme, which covered up to 80% of pay, for its retail and manufacturing staff between March and June. But the money has now been repaid given what the firm called its “resilience in trading and financial strength” during the crisis.

The footwear firm has opened 16 new stores, taking its total to 122 during the year. It saw particularly strong growth in the US, where five of the new stores opened, and the group also tested out branded areas in department stores.

Begun as a collaboration between a German doctor and a Northamptonshire footwear maker, Dr Martens has been enjoying a fashion moment in the last few years as part of renewed interest in 1990s-inspired looks.

While the original eight-holed 1460 boot remains a best-seller, the firm has also branched out into sandals and trainers, helping boost sales 48% to £672m while underlying profits rose 93% to £164m. Sales of sandals soared more than 50% during the year as the brand benefits from the trend for chunky footwear.

“The last few months have been a very challenging time for everyone and I am extremely proud of the resilience and commitment our teams have shown, which has enabled us to continue delivering for our customers throughout the pandemic,” Wilson said.

“Looking ahead, while we are currently in a volatile and uncertain trading environment, we have a very clear strategy in place supported by a strong brand and consumer connections, and I am confident in the outlook for the business.”