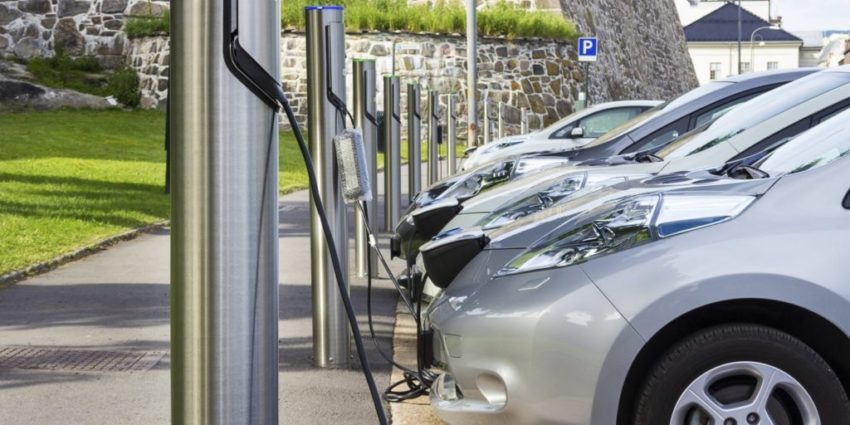 Electric vehicles are close to the “tipping point” of rapid mass adoption thanks to the plummeting cost of batteries, experts say.

Global sales rose 43% in 2020, but even faster growth is anticipated when continuing falls in battery prices bring the price of electric cars dipping below that of equivalent petrol and diesel models, even without subsidies. The latest analyses forecast that to happen some time between 2023 and 2025.

The tipping point has already been passed in Norway, where tax breaks mean electric cars are cheaper. The market share of battery-powered cars soared to 54% in 2020 in the Nordic country, compared with less than 5% in most European nations.

Transport is a major source of carbon emissions and electric cars are vital in efforts to fight the climate crisis. But, while they are already cheaper to run, their higher purchase price is a barrier to mass uptake. The other key factor is “range anxiety”, but this week the first factory production began of batteries capable of giving a 200-mile charge in five minutes.

Government grants and tax breaks have cut the cost of electric cars in some countries, but the point when they become cheaper without subsidies is key, said James Frith, the head of energy storage at BloombergNEF: “That’s definitely an inflection point. [Then] we really see the adoption of electric vehicles taking off and real market penetration.” In 2020, 4.2% of new cars were electric.

Richard Alvin, managing editor of electric vehicle website EV Powered, said: “There’s been a tipping point in one country, Norway, and that’s thanks to some clever and progressive tax incentives. Then consumers voted with their wallets.”

Data from Lenton’s latest study showed that in 2019, electric vehicles in Norway were 0.3% cheaper and had 48% market share. In the UK, where electric cars were 1.3% more expensive, market share was just 1.6%. Once the line of price parity was crossed, Lenton said, “bang – sales go up. We were really struck by how non-linear the effect seems to be”.

BloombergNEF’s analysis predicts lithium-ion battery costs will fall to the extent that electric cars will match the price of petrol and diesel cars by 2023, while Lenton suggests 2024-2025. McKinsey’s Global Energy Perspective 2021, published on 15 January, forecasts that “electric vehicles are likely to become the most economic choice in the next five years in many parts of the world”.

A poll of 3,000 UK drivers by the RAC, published on Thursday, shows the importance of prices, with 78% of motorists saying pure electric cars are still too expensive compared with conventional vehicles of a similar size and just 9% saying their next car would be electric. “The single biggest barrier to a driver choosing an electric car has to be cost,” said Rod Dennis of the RAC.

The fall in battery prices in the past decade has been dramatic and much faster than most people predicted, Frith said. In 2010, even a small-car battery of 30kWh would have cost $30,000, far more than the total price of an equivalent fossil-fuelled car. Today, BloombegNEFs research shows the battery pack costs $4,100, thanks to a scale-up in production and cuts in material costs, such as reducing the amount of expensive cobalt required.

Battery packs passed the milestone of $100/kWh in 2020 for buses in China, said Frith. But he expected further manufacturing improvements to mean this would be the average price for all vehicles in 2023, making a small-car battery cost $3,000 and electric cars the same price as their conventional counterparts.

Electric cars are quieter and have faster acceleration, and rapid mass adoption will also be increased by the fact that, once motorists have one, they will not want to return to a petrol or diesel vehicle. In a recent poll of 2,000 electric car owners, 91% said they would not want to go back.

“The poll shows the strong and enduring impact of switching to a clean car. The evidence in favour of electric vehicles grows more compelling with each one of our surveys, even in a year as disruptive as 2020, “ said Melanie Shufflebotham, at Zap-Map, which maps charging points.

One automotive trend is moving the other direction – the rising sales of petrol-guzzling SUVs. The International Energy Agency reported earlier in January that in 2020, despite Covid-19 lockdowns cutting global emissions, pollution from SUVs increased. Furthermore, over the past decade, SUVs were the only area among all energy-related emissions that increased in high-income nations.

However, battery prices are expected to continue to plunge, suggesting even power-hungry SUVs will be going electric before long. New lithium-ion technologies being developed are creating cheaper, more energy-dense batteries, that could start being introduced mid-decade.

An even more advanced technology, solid state batteries, could enter the mass market by 2030 if new manufacturing methods can be mastered, Frith said. BloombergNEF forecasts average prices of about $60/kWh at the end of the decade.

“It is an incredibly exciting time,” Frith said. “We see so much innovation coming from all areas, whether industry or research, and so much money being poured in by governments and everyone, that it seems like there will be a lot of changes to come and it’ll just get more exciting.”