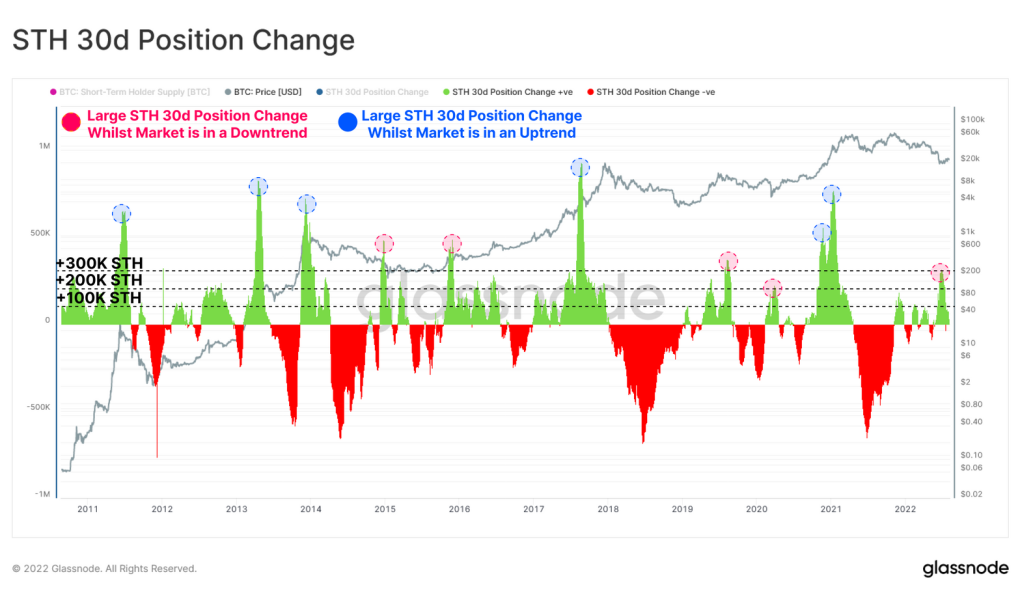 A recent spike in short-term BTC holders could signal a “final flush” of sellers, meaning the capitulation events have played out, leaving the market ready for months of accumulation.

The latest The Week On Chain report from market analysis firm Glassnode on Aug. 15 points out that short-term holders (STHs) have expanded their holdings by 330,000 BTC since May’s catastrophic LUNA collapse. As a result, they may be the canary in the coal mine signaling the path to market recovery.

During the mass sell offs starting in May through June, Short-term holders of Bitcoin (BTC) established a new trend by buying up extremely cheap coins at or below $20,000 which puts them in an “advantageous financial position.”

After a dramatic capitulation event, the ownership structure of #Bitcoin has been reshaped.

As markets sell-off, $BTC migrates from weaker hands, to those stepping in at the lows. Here, we explore how to track this migration of coins using age bands.https://t.co/xBxdvALRmZ

The report states that an outflow of about 200,000 coins from long-term holders (LTHs) and exchange net outflows since May appear to have been the main contributors to the swelling STH supply. Altogether, these events indicate that a capitulation has occurred and that STHs “stepped in during the flush out, and now own coins with a much lower cost basis.”

STHs are defined as wallets that have held BTC for no more than 154 days. They become LTH at 155 days.

Typically, STHs buy coins at or near all-time high prices and selling much lower as “extreme STH accumulation is normally concurrent with bull market topping formations.” However Glassnode stated that buyers from May and June created a “constructive divergence” in bucking that trend.

“Such events describe a transfer of coins to new buyers whom are initially classed as STHs, but have a low cost basis, but are in an advantageous financial position to HODL from there on,” it added.

Related: Bitcoin price corrects after hitting a wall at a multi-month descending trendline

Glassnode suggests that the next aspect of a market turnaround that analysts must look at is whether the new STHs from May and June “have the conviction to hold on” and contribute to further price increases.