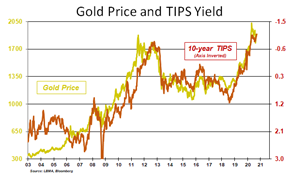 As the current wave of Covid19 strongly takes hold, it has devastated the lives of individuals and families and created an uneasy anxiousness not just in individuals but also in financial markets. It has turned a public health crisis in to an economic, financial and in some cases a political crisis too. We have watched as some of the most powerful democracies in the world struggle to maintain the very thing that defines them. All the while gold sits and watches and acts as a barometer for the perceived risk in the world.

As it sat with a wise head throughout 2020 signaling that all was not well, is 2021 the year that the barometer is set to explode?

Gold and Silver prices closed December on a positive note, gold gained 6.8% and silver 16.6% for the month. For all of 2020 gold gained 25.1% and silver 47.9%. The main rally for the year was from mid-March to mid-August when both metals set the high for the year; gold’s year high was also a new all-time high of $2,063.54 on August 6 and silver’s year high was $29.13 on August 10. Silver’s all-time high was $48.49 on April 28, 2011. The March to August rally was driven by massive amounts of fiscal and monetary stimulus to offset the economic impact of the coronavirus-induced lockdowns.

The IMF estimates that governments have added more than $12 trillion in fiscal support.  In addition to cutting interest rates, the five major central banks (the Fed, ECB, BoC, BoJ, and BoE) have added more than $8 trillion in assets to their balance sheets since March 2020 in order to support their respective economies during the Covid-19 pandemic. This compares to about $2.5 trillion in initial response from the central banks to the Great Financial Crisis in 2008-09.

After an initial decline from the highs for the year in August both gold and silver traded somewhat sideways as markets balanced recession fears with reflation expectations through the end of November. Central banks slowed their quantitative easing programs and governments pulled back on fresh stimulus spending. Then both metals began to rally again in December on hopes, then passage of new stimulus spending in the US and lower real interest rates. This rally has continued into the first trading week of 2021, which brings us to what we can expect in 2021.

There are many factors that will support higher gold and silver prices in coming years, such as, the US dollar continuing to decline, new fiscal stimulus, continuing low real interest rates, geopolitical crises and improving retail demand as the economy improves. However, there are two underlying bullish factors that we expect to be the main drivers of higher gold and silver prices in 2021: declining real-interest rates and increased global liquidity.

Central bank forward guidance in recent weeks calls for policy rates to stay low for the foreseeable future. The Bank of England is looking into negative rates, and the Federal Reserve recently adopted average inflation targeting of 2%, which the ECB is now considering following. The Federal Reserve’s summary of economic projections released with its September statement showed real-interest rates reaching negative 1.62% by 2023 year-end.

Interest rates are likely to stay low for many years to come due to the increased government deficits this year and continuing rising government debt levels. With policy rates remaining low, if the yield curve steepens as longer-term interest rates rise with renewed inflation expectations central banks are likely to implement some form of yield curve control by purchasing increased amounts of longer-maturing debt. Included in this factor of low real interest rates is negative yielding debt, which globally grew to a record high of over $18 trillion. Gold and silver prices are negatively correlated to real-interest rates (TIPS: Treasury Inflation Protected Securities).

Central banks responded swiftly this year adding unprecedented amounts of assets to their balance sheets. Although the rate of increase of asset purchases has slowed in recent months, we expect central banks to continue to increase their balance sheets for at least the next two years. Their work is not done yet. The economic recovery needs time to gather steam and governments are continuing to run huge deficits that central banks will need to soak up.

Although there is significant progress on the Covid-19 vaccine front, the economic decline due to the virus has been severe and it will take up to 12 months to get a significant population vaccinated – and considering the newly discovered strain of the virus out of the UK, the concern that a strain of the virus that the vaccine does not work against could arise. In addition, fiscal stimulus packages and economic support will also continue throughout 2021.

Economic and financial events to watch this week

The main economic releases for the week are the Fed minutes and ADP Employment report on Wednesday. If the Fed meeting minutes show a consensus in the discussions at the last meeting of a dovish leaning Fed, then gold and silver prices should move higher on the release.

The last note we leave readers with is the final 15 days of Trump’s presidency could create some geopolitical upticks in gold and silver prices. And as both seats in Georgia have gone to the Democrats the Senate is tied 50-50 (Vice President-elect Harris will now act as the tie-breaking vote), we can expect larger fiscal stimulus packages to pass Congress than if Republicans had maintained control of the Senate. This should also be good for gold and silver prices.

Buy gold coins and bars and store them in the safest vaults in Zurich, Switzerland with GoldCore.

I am the CEO of GoldCore. We help investors buy and store gold and silver easily and cost effectively. We offer a service to purchase, sell and/or store precious metals personally or through a pension, a company or a family office.