Share The Knowledge
This story originally appeared on Zacks

The Hartford Financial Services Group HIG recently sold its Navigators Holdings (Europe) NV and subsidiaries to Premia Holdings, Bermuda domiciled legacy reinsurer. The deal was closed on Dec 29, 2021, after being approved by the National Bank of Belgium and the Commissariat Aux Assurances in Luxemburg.
However, further terms of the transaction were kept under the wraps.
The divested businesses include property and casualty insurer Assurances Continentales NV (known as ASCO) in Belgium, and its captive reinsurer Canal Re S.A. in Luxembourg. Navigators Holdings will now be renamed Premia Holdings (Europe) NV.
Premia’s management has plans to turn ASCO into a provider of run-off solutions with new growth opportunities. Premia has a solid presence in Bermuda, the United States and the United Kingdom, including a managing agent at Lloyd’s of London.
Hartford Financial bought The Navigators Group, Inc. back in 2019 for a total price of $2.2 billion in cash. The multiline insurer made this move to achieve its key financial and strategic objectives, such as geographic expansion, establishment of its existence in Lloyd’s, a wider range of product offerings, better value proposition to agents and customers, and lend a boost to its commercial lines business. The consolidation was expected to merge the best of disciplined underwriting cultures, talent and commitment plus innovation of both companies to enhance the combined entity’s product and service suite.

This divestiture is expected to streamline its business.

The currently Zacks Rank #3 (Hold) player is leaving no stone unturned to streamline its business for focusing on its core business. Hartford Financial is constantly vending non-core businesses to concentrate on its U.S. operations and enhance its operating leverage. Apart from lowering expenses, boosting profitability and improving returns to shareholders, these divestitures are driving financial flexibility by freeing up more capital. You can see the complete list of today’s Zacks #1 Rank stocks here.
Earlier this year, HIG also divested its Talcott Resolution.
Shares of Hartford Financial have gained 42.9% in a year’s time, outperforming its industry’s growth of 4.1%. Cost reduction, sound financial footing and efficient capital management position HIG well for long-term growth. 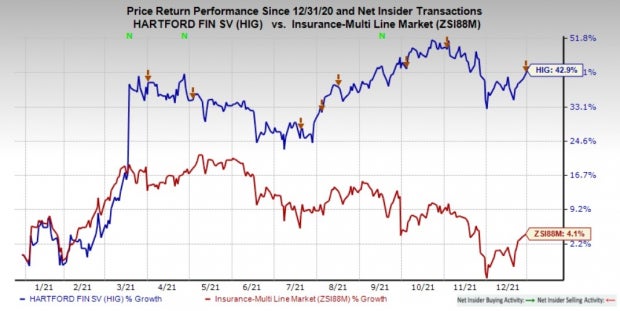 Some better-ranked stocks in the insurance space are CNO Financial Group, Inc. CNO, Old Republic International Corporation ORI and Brighthouse Financial, Inc. BHF. All the companies hold a Zacks Rank #2 (Buy).
CNO Financial is a top-tier holding organization for a group of insurance companies operating throughout the United States, which develops, administers and markets supplemental health insurance, annuity, individual life insurance and other insurance products. CNO came up with a trailing four-quarter surprise of 13.2%, on average.
Old Republic International Corporation is an insurance holding firm whose subsidiaries actively market, underwrite and provide risk management services for a wide variety of coverages, mainly in the general and title insurance fields. ORI’s earnings managed to surpass estimates in all its trailing four quarters, the average being 54.6%.
Brighthouse Financial is a holding organization formed to own the legal entities that historically operated a substantial portion of the former Retail segment of MetLife, Inc. BHF delivered a trailing four-quarter surprise of 67.6%, on average.
Shares of CNO, ORI and BHF have gained 9.2%, 25.2% and 46.2% each in the past year.

Blockchain and cryptocurrency has sparked one of the most exciting discussion topics of a generation. Some call it the “Internet of Money” and predict it could change the way money works forever. If true, it could do to banks what Netflix did to Blockbuster and Amazon did to Sears. Experts agree we’re still in the early stages of this technology, and as it grows, it will create several investing opportunities.

Zacks’ has just revealed 3 companies that can help investors capitalize on the explosive profit potential of Bitcoin and the other cryptocurrencies with significantly less volatility than buying them directly.

Want the latest recommendations from Zacks Investment Research? Today, you can download 7 Best Stocks for the Next 30 Days. Click to get this free report