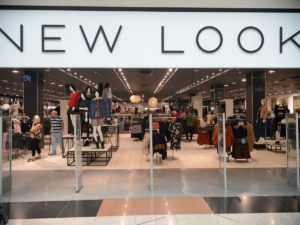 New Look, the struggling high street fashion chain, has launched a restructuring plan to cut rents and reduce its debt pile following a sharp drop in sales during the crisis.

The retailer has proposed a company voluntary arrangement (CVA) to move its 496 shops to turnover-linked rents as part of a plan it said will safeguard 12,000 jobs. It has agreed a deal with banks and bondholders to recapitalise the business. However, the financing is contingent on the success of the CVA, which will require support from New Look’s landlords.

New Look began as a single fashion store in Taunton, Somerset, from which it has grown into a brand with nearly 500 outlets in the UK and Ireland. Its online business ships goods to around 66 countries generating about 20 per cent of sales.

Nigel Oddy, its chief executive, said the CVA was being launched “out of absolute necessity” due to the impact of coronavirus on the retailer’s finances. New Look has re-opened 459 of its 496 stores since the relaxation of government restrictions.

However, since re-opening, store sales performance is down 38 per cent on a like-for-like basis which the retailer said was predominantly due to the continued impact of Covid-19 on footfall.

The CVA is expected to launch on August 26. It is the second time the retailer has used the insolvency process in three years.

If the CVA is successful, New Look will carry out a debt for equity swap to reduce its senior debt pile from around £550 million to £100 million. Creditors have also agreed to inject £40 million of new capital to support the retailer’s business plan to strengthen its online retail arm. In tandem with the recapitalisation, the retailer’s financial adviser, Perella Weinberg, is approaching investors to determine interest in the purchase of New Look shares or assets.

The proposed recapitalisation follows one in January 2019, which left New Look’s main shareholders as South Africa’s Brait and the hedge funds Alcentra, Avenue Capital and CQS.