Petrol stations face disruption for up to a month even if panic buying stops, industry figures have warned as the Army is set to start driving fuel tankers to petrol stations this week – despite Boris Johnson’s claim petrol panick-buying is ‘stabilising’.

The Prime Minister was accused of a ‘half-baked’ response to the fuel crisis earlier tonight as he dismissed calls for key workers to get priority at petrol stations.

Industry sources have told The Times that disruption could carry on for weeks, even if panic buying dies down, due to the time it would take to restock petrol stations. One source said they expected BP to keep tackling issues throughout next month.
Johnson tried to calm the chaos by urging the public to ‘fill up in the normal way when you really need it’, although he also warned that the government is working on ‘getting through to Christmas and beyond’.

But Defence Secretary Ben Wallace has now signed off the request for military assistance, with up to 300 troops able to be deployed if required. 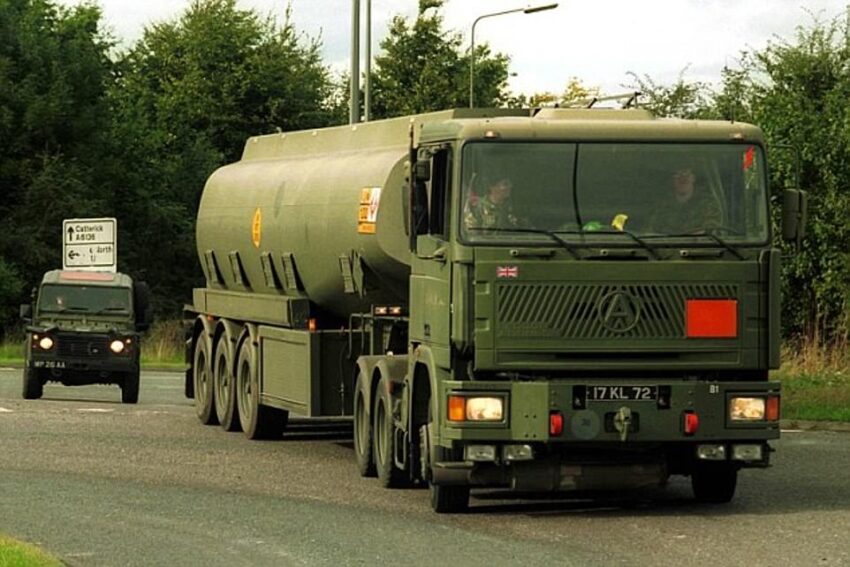 Sources said 150 drivers and 150 drivers’ mates could be made available under Operation Escalin. Government sources confirmed the military assistance to the civil authorities (Maca) request had been approved.

All military drivers are qualified to be behind the wheel of HGVs but they may need three days’ training to learn how to fill petrol stations with fuel.

Risking infuriating motorists who have been facing extraordinary carnage across the country, Johnson earlier laid the blame on a ‘slightly misleading’ account of the shortages of lorry drivers causing an ‘understandable surge in public demand’.

‘What we want to do is to make sure we have all the preparations needed to get through to Christmas and beyond, not just in supply for petrol stations but all parts of the supply chain.’

Pressed on whether he would be calling it a crisis if anyone else was in No10, Mr Johnson said: ‘What we have is a recovery after a global pandemic.’

The intervention, in a statement from Downing Street, came as the Labour leader weighed in, saying the issues over drivers had been ‘entirely predictable’ and the government’s limp response had resulted in ‘chaos’.

In a round of interviews from his party conference in Brighton, Sir Keir called for the length of emergency visas for foreign HGV drivers to be doubled to six months.

But he refused to say that Brexit was ‘to blame’, instead arguing that it was an inevitable consequence of the decision that was taken. Aides said the PM’s brief chat with broadcasters exposed that there was still ‘no plan’ and the government was complacent.

The comments came as more fighting broke out on Britain’s ‘Wild West’ petrol forecourts today, with drivers throwing punches and even pulling knives as violent rows broke out in the long queues.

However, minister insist there are ‘tentative’ signs the crisis will ease this week.

Mr Johnson was making his own position clear for the first time, as MPs slammed his decision not to bring in soldiers to deliver fuel immediately to ‘regain public confidence’ and petrol stations started rationing fuel sales at £30.

Mr Johnson said: ‘I want to say, first of all, how much I sympathise with people who’ve been worried about their journeys, worried about whether they’ll be able to use their cars in the normal way, to see their loved ones or whatever it is, and I know how frustrating, infuriating it must have been to worry about shortage of petrol or fuel.

‘We now are starting to see the situation improve; we’re hearing from (the) industry that supplies are coming back on to the forecourt in the normal way.

‘I would just stress that on the forecourts the situation is stabilising and people should be confident and just go back to their business in the normal way.’

Asked whether he agreed that key workers needed priority at the pumps, Mr Johnson said he ‘understands why people say that’ but suggested that instead the situation should ‘stabilise in a normal way’.

On the wider issues, the premier repeated his mantra that wages and training must improve for Britons, rather than bringing in more foreign labour.

‘The actual number of lorry drivers that we’re short in that particular sector isn’t very big. But generally there is a shortage in that profession around the world,’ he said.

‘And what we want to see is an emphasis on high wage, a high-skill, a high-productivity approach to our economy.

‘What I don’t think people in this country want to do is fix all our problems with uncontrolled immigration. Again, we tried that for a long time – 20 years or so, perhaps longer.

‘And in the end, people could see that it was leading to a low-wage, low-skill approach without enough investment in people or in equipment, in capital. And that’s not the way we want the UK to develop and grow.’

Speaking to BBC News in Brighton, the Labour leader said: ‘The Government has reduced the country to chaos as we track from crisis to crisis and the Government is not gripping this.

‘I spoke to the haulage sector this morning to the businesses that are absolutely in the middle of this, and they are beyond frustrated and these were their words, they said it’s a Government that is denying there’s a problem, then blaming somebody else, and then coming up with a half-baked plan. What I would do is give priority to key workers this week.

‘And I would issue enough visas for lorry drivers for long enough. At the moment there was some talk this morning on the discussion that the pieces may not even begin until November. And we have to take action today.

‘The Prime Minister should take that action today, prioritise key workers and start issuing enough visas and for long enough. The strong view this morning was that three months visas won’t work, they’ve got to be six months visas.

‘But this problem was predictable and predicted and the Government has absolutely failed to plan.’

Sir Keir resisted blaming Brexit for the shortage of HGV drivers but accepted it was partly a consequence of leaving the European Union.

Speaking to Channel 5 News, the Labour leader said: ‘I wouldn’t say that Brexit is to blame. What I would say is that it was inevitable as we exited the EU that we needed a plan to deal with drivers. That is obvious whether you voted Remain or voted Leave, and we took that decision years ago.

‘And here we are with a shortage of drivers which was completely predictable and predicted – and the Government hasn’t got a plan.’

But later speaking to Sky News, Sir Keir said: ‘What is the sole cause of this problem? The Government has known for some time that there are consequences of us leaving the EU, one of which is lorry drivers.’

Earlier, Transport Secretary Grant Shapps claimed the pressure on filling stations is beginning to ease and insisted the Army would remain on standby despite admitting the queues will not disappear yet.

‘There are now the first very tentative signs of stabilisation in forecourt storage which won’t be reflected in the queues as yet,’ he said in a pooled TV clip.

‘But it is the first time that we have seen more petrol actually in the petrol stations. The sooner we can all return to our normal buying habits, the sooner the situation will return to normal.’

As one driver was seen filling mineral water bottles with petrol, he said: ‘No more water bottles at petrol stations: it’s dangerous and not helpful’.

New video has emerged of two men punching and kicking each other across a London Shell station in a row about whose turn it was to fill up. Two women yelling ‘what the f*** are you doing’ broke up the punch-up as one of the fighters pointed at his foe and yelled: ‘He stole my place’.

Amid widespread scenes of enormous queueing across Britain’s forecourts, footage emerged of a man holding what appears to be a knife shouting at a driver outside a petrol station in Welling, south east London. The video then shows the car ramming into the alleged knifeman, who is then carried for several yards on the bonnet.

And it is proving so difficult to get fuel, thieves have been siphoning it from cars, sometimes drilling into the petrol tank, Shadrack Olaloko, from Birmingham, said: ‘What these guys did was they came and drained out all my fuel in the tank’.

The brawls broke out as motorists reported queues at 11pm, 3am and 5.30am across the UK as the Government was accused of being ‘asleep at the wheel’ and critics questioned claims within Whitehall that the crisis will be over within two to three days.

Mike Granatt, former head of Britain’s civil contingencies secretariat, the section of the Cabinet Office responsible for emergency planning in the UK, said today that the Prime Minister should give a TV press conference on the fuel crisis, as Tony Blair did in 2000. He said: ‘It’s called leadership. And we need some. Someone needs to stand up and say this to people rather than hide away’.

Tobias Ellwood, chair of Parliament’s Defence Committee, has said the army should be mobilised, not just put on standby, to ‘regain public confidence’ and stop the fuel crisis.

The Conservative MP told Sky News: ‘The country wants to see the Government is in command and it has a clear cross-Whitehall plan.

‘We have gone from 1 per cent fuel pump shortages to 90 per cent so altering people’s buying behaviour to prevent the panic buying and going back to previous purchasing patterns requires regaining the confidence of the nation.

‘I believe the army should not just be put on standby but in fact mobilised, be seen to be used.

That will help ease the pressure on shortages of course, it will return public confidence, and then on top of that there is the bigger issue about articulating a clear strategy to alleviate the chronic shortage of lorry drivers.’

Such is the panic at the pumps, hundreds more people than usual have been filling up on the wrong fuel. Around 250 flustered drivers have had to be rescued by the AA’s specialist ‘fuel assist’ team on Saturday and Sunday – compared to around 20 in normal circumstances.

One tanker driver told LBC that even they are struggling for fuel because they are spending so much time in queues with drivers also blocking access to HGV pumps.

An industry source said while the claim could be ‘credible’, it is likely to be an isolated incident.

Danny Altmann, professor of immunology at Imperial College London, said Britain’s petrol stations had becoming the ‘Wild West’ after he queued for fuel only for it to sell out before everyone got to the pumps.

He said: ‘Man behind me was furious and started punching the guard’, adding it ‘became a melee of 8-10 men on the ground, punching and kicking’.