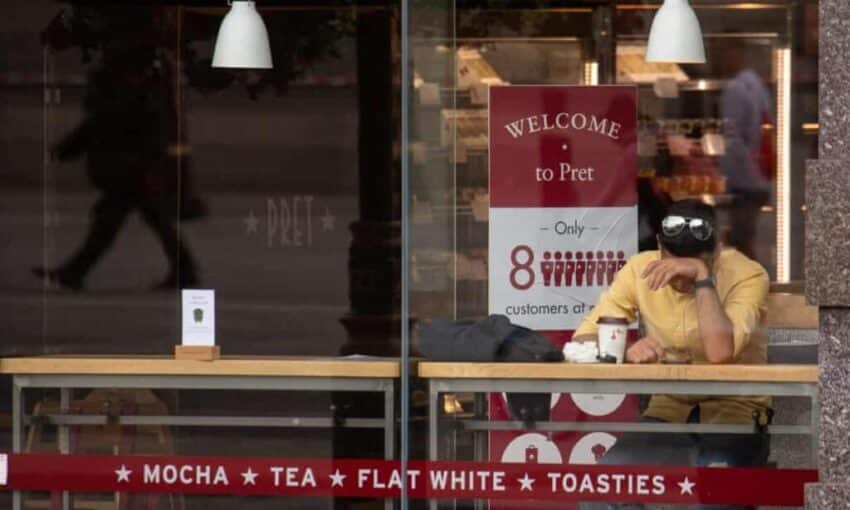 Pret a Manger is to cut nearly 2,900 jobs after the desertion of high streets due to the coronavirus pandemic sent its sales plummeting, fuelling concerns about the economic impact of sustained remote working.

Hours after the business lobby group the Confederation of British Industry warned that cities could become “ghost towns” unless the government acts, the sandwich chain said it had been ravaged by the loss of passing trade.

The group reopened 367 of its 410 UK shops last month but sales have been 60% lower than last year, leading to the expansion of a programme of cuts that was previously expected to affect 1,000 people, with 30 branches set to close.

Pret’s chief executive, Pano Christou, said: “I’m gutted that we’ve had to lose so many colleagues. Although we’re now starting to see a steady but slow recovery, the pandemic has taken away almost a decade of growth at Pret.”

The chain is the latest in a long line of businesses to cut jobs in response to lower urban footfall, with only 17% of staff back in their workplace by early August, according to research by the Centre for Cities.

The global advertising giant WPP said on Thursday that just 3% of its 10,000 UK staff are regularly in the office.

Grab-and-go food outlets that rely on hungry office workers and commuters have been particularly hard hit by the shift in working patterns. The airport and train station specialist SSP, which owns Cafè Ritazza and Upper Crust, said in July it would cut 5,000 jobs because of dwindling passenger numbers, while the high street cafe Le Pain Quotidien shed 200 staff after it was bought out of administration.

As Pret added to the pile of job losses, the Labour party urged Boris Johnson to come up with an urgent plan to save city centres.

The shadow minister for business and consumers, Lucy Powell, called for a package of financial support to make up for lost footfall, including the relaxation of restrictions on which businesses can apply for £12.3bn in grant money.

About £1.4bn of the grants, only available to businesses below a certain size, are set to be clawed back by the government because they are unused.

“The bigger city centres are very, very hard hit,” said Powell. “It’s a double whammy. It’s not just the office workers, which is a big part of what makes up retail and hospitality, but also for somewhere like Manchester, all that is added to by the footfall from football matches, massive concerts, weddings, hen nights and conferences.

“The government’s got to recognise that the economic support does need to follow whether companies are allowed to reopen or not,” she said. “We need a bigger plan for city centres. This is a whole ecosystem.”

Earlier on Thursday, the CBI’s director-general, Carolyn Fairbairn, writing in the Daily Mail, called on the prime minister to do more to get office workers back to their desks to prevent cities from becoming ghost towns.

Plans being put into place by large employers indicate that hundreds of thousands of mostly white-collar workers will continue working from home, in some cases permanently, despite the reopening of schools in England over the next fortnight.