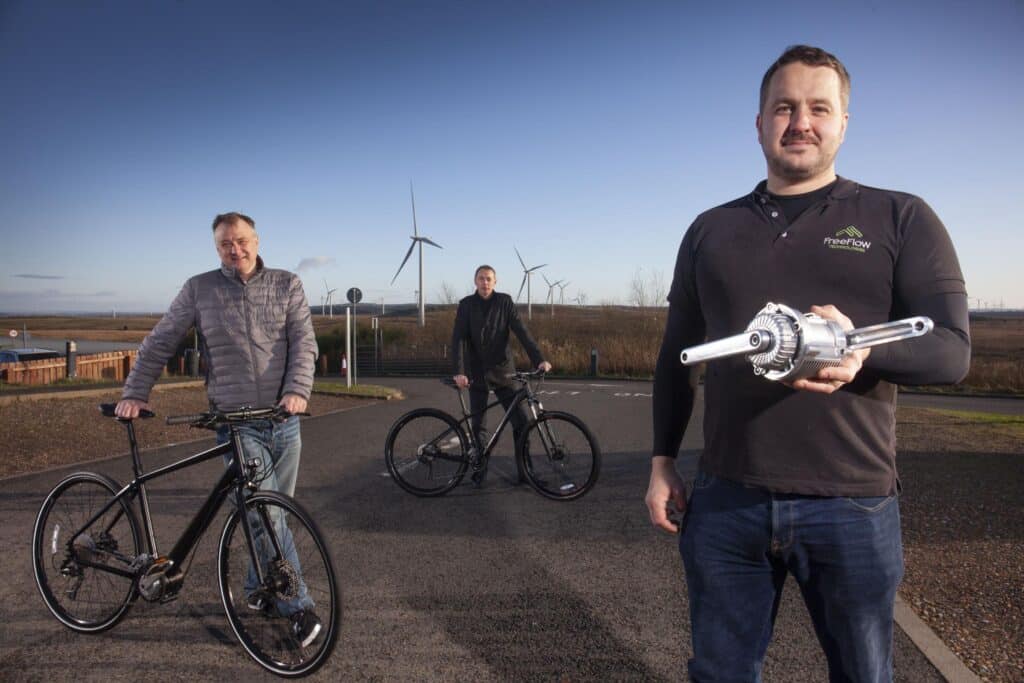 In the new era of city mobility, e-bikes, without a doubt, are going to become a preferred transport option for many, thanks to social distancing norms.

However, other reasons including, an increase in air pollution, environmental awareness, and traffic congestion, make e-bikes a go-to option for many commuters.

The rapidly growing electric bike market was worth £4.9 billion in 2018 and is expected to grow to £11.8 billion in 2023 according to the Confederation of the European Bike Industry and The Light Electric Vehicle Association.

Embracing the situation, many OEMs are working hard to capture a chunk of market share, and one among them is FreeFlow, developer of the world’s lightest, greenest electrical bike.

Based in Glasgow, the e-bike company has recently secured £1.85 million from a heavily oversubscribed funding round. The funding round was led by investment syndicate Kelvin Capital and supported by Equity Gap, Foresight Williams, and Scottish Enterprise. The company raised £1.8 million in an earlier funding round in October 2018.

The new investment will support a move to a new headquarters and R&D facility in East Kilbride and further strengthen the team with senior technical positions and assembly engineers recruited.

Founded in 2012 in Glasgow by e-bike innovator Neil MacMartin, the UK company’s patented e-bike transmission system is more lightweight and provides a higher power density, with the motor and battery easily assembled into the bicycle frame rather than an oversized attachment as is common with current e-bikes.

The company has also developed an unprecedented mechanical transmission system for fixed wheel bikes that allows the rider to freewheel, whilst retaining the smooth ride quality of the fixed wheel.

As per the company’s claims, numerous brands are working on frame designs to incorporate the new FreeFlow Technologies ETS (Electronic Transmission System) into bikes for launch into the market in 2021.

Martin McCourt, Chairman of FreeFlow Technologies said: “The e-Bike market is booming as many sections of society seek alternatives to public transport and take a greater interest in their personal health. Great trends that truly benefit our citizens and our environment. The FreeFlow drive system transforms the look and riding performance of e-bikes. Now an e-Bike can look like a normal bike, and ride like one!”

David Hemming, Managing Director of FreeFlow Technologies added: “Before Covid hit the world the e-Bike sector was forecasted to grow by double digits each year for the foreseeable future however the global pandemic has changed the way people think about bikes across all walks of life. The needs for exercise and wellbeing and the need for viable transportation options to and from work that is an alternative to public transport are now high on the public’s mind.

“The Covid pandemic has also accelerated the cargo/last-mile delivery sector as well with many companies looking to get deliveries from suppliers to end consumers with increased urgency and efficiency. This sector is also on a huge growth curve with e-Bikes being seen as a significant part of that solution, particularly in urban areas of the world.”

John McNicol from Kelvin Capital said: “The events of 2020 have brought an unexpected rise in the number of people cycling and, in particularly e-Bike sales, something that hasn’t been seen since the 2012 Olympics. Kelvin Capital is delighted to back FreeFlow Technologies with this investment round. It is a business bringing innovation to a well-established market with an impressive management team including the ex-senior exec team of Dyson and business leadership from major cycling brands such as Cannondale, Rapha, Marin Bikes, and Whyte Bikes.”

Chris Wiles Senior Investment Manager at Foresight Group said: “The e-Bike market has grown much more quickly than we had initially expected, and we are delighted to see FreeFlow close this substantial funding round to finalise development and bring the product to market in 2021.”