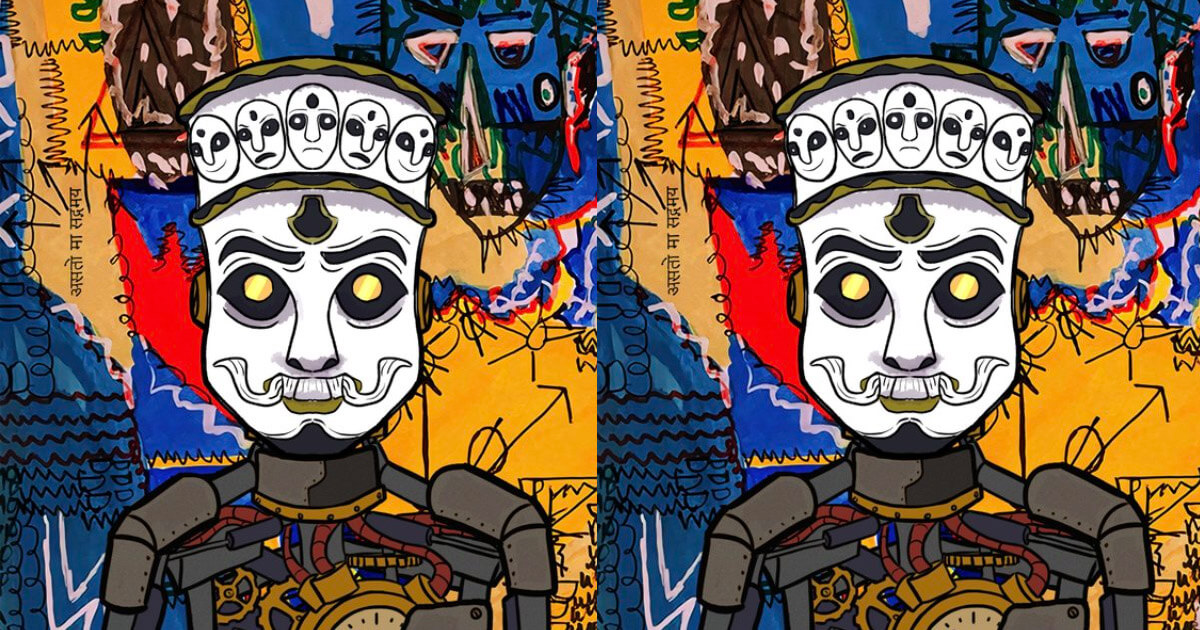 A story of how a Sanskrit message and a set of poring eyes brought together Hashmasks twins “Mansa and Jim.”

A user has found an easter egg—a term used to describe a message, image, or feature hidden—of sorts in the wildly popular non-fungible token project Hashmasks. The latter is a set of over 16,000 unique artworks designed by over 70 artists, some of which were sold for over 420 ETH each last week.

Non-fungible tokens are a special type of cryptographic token which represents something unique, such as an art piece, a real-world asset, or just about anything. They have existed as a concept since 2013 but sprung into fame after the launch of Crypto Kitties in 2017.

As per a post, a set of “twins”—the only such occurrence in the entire piece—were found by “trent e” (he’s also one of the developers of DeFi project Yam Finance). “I’ve done little but look at hashmasks…I’m happy to introduce “The Real” and “The Unreal,” the rarest masks behind the unmasked,” he said on Twitter.

since discovering the hashmasks announcement tweet, i’ve done little but look at #hashmasks — easily 20+ hours just looking through them.

a couple days ago that obsession paid off. i’m happy to introduce “The Real” and “The Unreal”

Last week, after the launch of Hashmasks, Trent pored over the entire collection to discovered anomalies, similarities, and other nuances of the projects. After many hours, one such illustration caught his eye—a Sanskrit prayer written on one of the images.

He initially took it to be a unique occurrence and continued his research. But 6384 masks later, Trent ended up discovering a twin mask, one whose unique characteristics did not match with those of the initial one.

what an brilliant easter egg!

but i looked at the interface below, oh wait, the traits listed do not match the mask.

like a total fucking nob, i messaged the hashmask team alerting them of an interface issue on this mask

this will easily be a 100+ ETH mistake pic.twitter.com/hkOkzA4jt8

Trent immediately pinged the Hashmasks team about the possible ‘error.’ The team, in turn, after hours, announced the occurrence was not intentional, but rather a human error that caused the image of #3550 to replace the original image of #9934.

The team added that the only real differentiators of these two Hashmasks were the name, the index numbers and Hashmask numbers, and the data size of the image file.

“These are the only two identical Hashmasks in the entire collection, and we embrace them. Who knows, maybe the twins will someday be reunited in the same account.”

Despite the team’s explanation, Trent said that some questions lingered. “Hashmasks clearly want to play this off as an accident… and they seemed genuinely freaked out when I told them. But never fully trust anyone, esp anon, in this space,” he said.

His reason(s)? One, that the two original indexes were exactly “1000 apart” while the file quality was one “1 different.” This meant that it may have been enough for a different hash but would have caused no real sacrifice to quality.

my personal theory is this was a rogue move by a single dev within the team, who implemented the duplication without the knowledge of the rest of the team

Trent even stated that the Sanskrit line itself was the name of a prayer in which the first line says “real and unreal.” Could that have been a coincidence too or a rogue move? Guess we’ll never find out.

Explore all NFT coins on CryptoSlate.