Working in the restaurant industry can be tough, especially when you have disgruntled or difficult customers that can test your patience. 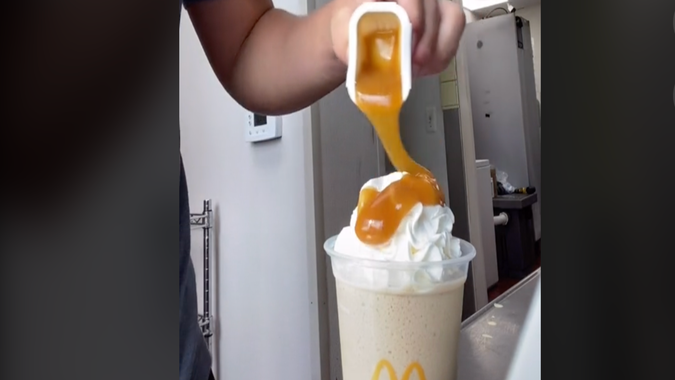 It’s not, however, well-advised or even legal to use that as grounds to purposely mess up their order.

One TikToker has gone viral after posting a video of himself doing just that before reportedly being promptly fired from his position at McDonald’s.

In the video that has now garnered a whopping 62.8 million views, the man makes a McDonald’s frappe behind the counter.

“When the customer has an attitude but u remember I only make [$]8.50 an hour,” says the text overlaying the clip.

After pouring whipped cream on the top of the drink, the employee opens a packet of sweet and sour sauce and begins to drizzle it over the whipped cream, presumably to replace the caramel drizzle that is typically used.

The video has earned over 102,600 comments, most of which condemned the former employee for his actions.

“Can’t you be cited or arrested by PD for that? What if they were allergic to sweet and sour and they died,” one user pointed out.

“I will legit fight you if you serve me that,” another said.

In a follow-up video posted nearly two weeks later, the same employee posted a video of himself standing in the parking lot of McDonald’s waving at the building.

Related: A McDonald’s Manager Just Crushed the Dreams of Tens of Thousands of Customers

“Ladies and gentlemen you did it,” the text overlay says in the clip. “You got me fired … bye McB****es.”

Understandably, not many people had sympathy for the worker.

“You got yourself fired,” one user wrote next to several crying laughing emojis. “Don’t cry and blame it on us.”

Others said the former McDonald’s worker “deserved” to be fired with others joking that instead of complaining about only making $8.50, he would now be making $0.

McDonald’s did not formally comment on the alleged firing.

The fast-food chain was up 23.47% year over year as of late Tuesday afternoon.