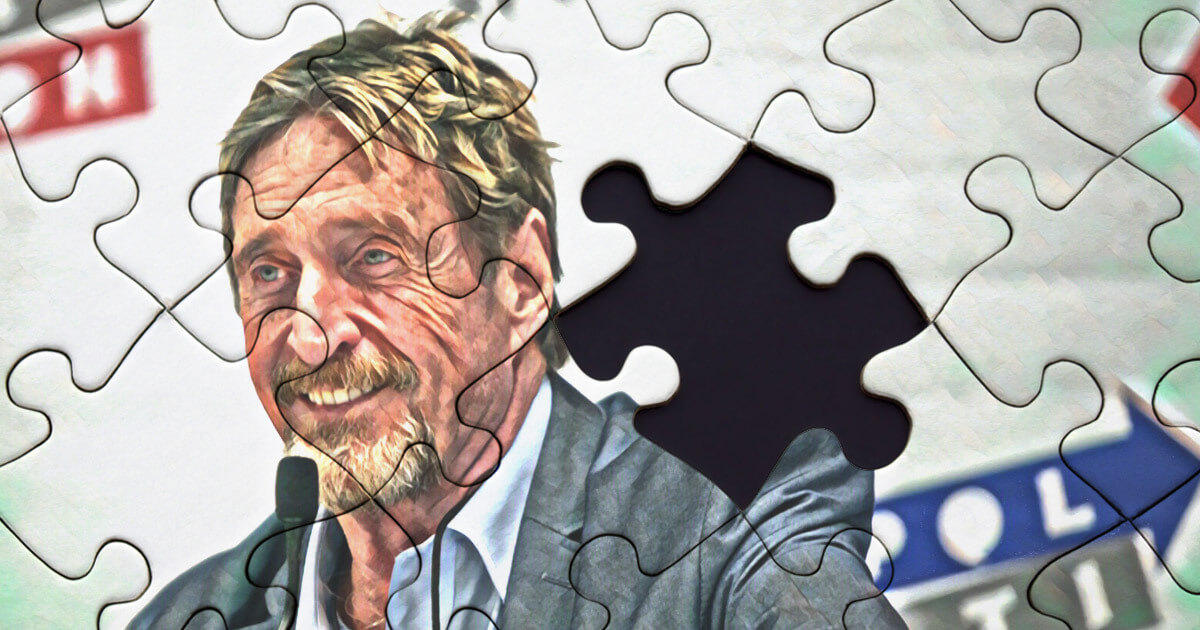 John McAfee reportedly died in a Catalan prison hours after the Spanish High Court agreed to extradite him to the U.S to face tax evasion charges. He was considered a crypto expert following his participation in the space.

McAfee, known for his over-the-top lifestyle, famously said in 2017 that he would eat his own member if Bitcoin didn’t reach $1 million by the end of 2020. Although McAfee had previously been a big proponent of the world’s largest cryptocurrency, he began to change his tune closer to the deadline, calling it a “worthless coin.”

Given his wealth and status, McAfee claimed to be privy to hidden information. In turn, his social media posts became the topic of intense debate and controversy. He even claimed to know the identity of Satoshi Nakamoto and threatened to reveal it.

On a more sinister level, he also claims to have information on government corruption. This, he said, is the real reason why authorities seek to incarcerate him, as opposed to the tax evasion charges being publically stated.

I’ve collected files on corruption in governments. For the first time, I’m naming names and specifics. I’ll begin with a corrupt CIA agent and two Bahamian officials. Coming today. If I’m arrested or disappear, 31+ terrabytes of incriminating data will be released to the press.

With his life a jumble of mystery, hearsay, and allegations, his death from purported suicide raise questions on whether official reports can be trusted.

Since October 2020, McAfee was being held in the Centre Penitenciari Brians 2, Barcelona, after the U.S indicted him for tax evasion after allegedly failing to declare millions in crypto earnings. He was arrested by Spanish police while attempting to board a flight from Barcelona to Istanbul.

In 2018, McAfee revealed that he charged $105,000 for each tweet he posts promoting a crypto project. Given his influence on the industry, this was a price many were willing to pay.

But investigators said McAfee and his team were responsible for perpetrating pump and dump schemes and sought to charge him with securities fraud and money laundering offenses.

” The cryptocurrencies and tokens he endorsed included Verge, Electroneum, Burstcoin, Dogecoin, and Tron, among others.”

The SEC claims he was paid more than $23 million, in crypto, to promote Initial Coin Offerings (ICOs).

On separate criminal charges, the Department of Justice indicated McAfee for tax evasion and failure to file tax returns from 2014 to 2018. They further allege McAfee attempted to evade the IRS by concealed assets including property and a yacht in the names of others.

“John McAfee earned millions in income from promoting cryptocurrencies, consulting work, speaking engagements, and selling the rights to his life story for a documentary.”

As a man at the center of much controversy, it’s difficult to filter out fact from fiction.

However, commenting on his imprisonment in Barcelona, McAfee said he has no intention of killing himself.

The food is good. All is well.

Know that if I hang myself, a la Epstein, it will be no fault of mine.

Things can change in the eight months since this tweet was made. Nonetheless, theories surrounding his death have intensified since news of his reported suicide broke yesterday.

In the past, McAfee even spoke about the Deep State and how it exerts its negative influence on people’s lives without fear of reprisal.

“Is there a Deep State? Yes. Can we fire these people? No. Can presidents fire them? No. It’s designed that way so political parties and political interests cannot affect the Deep State. Do you understand the nightmare of our situation people?”