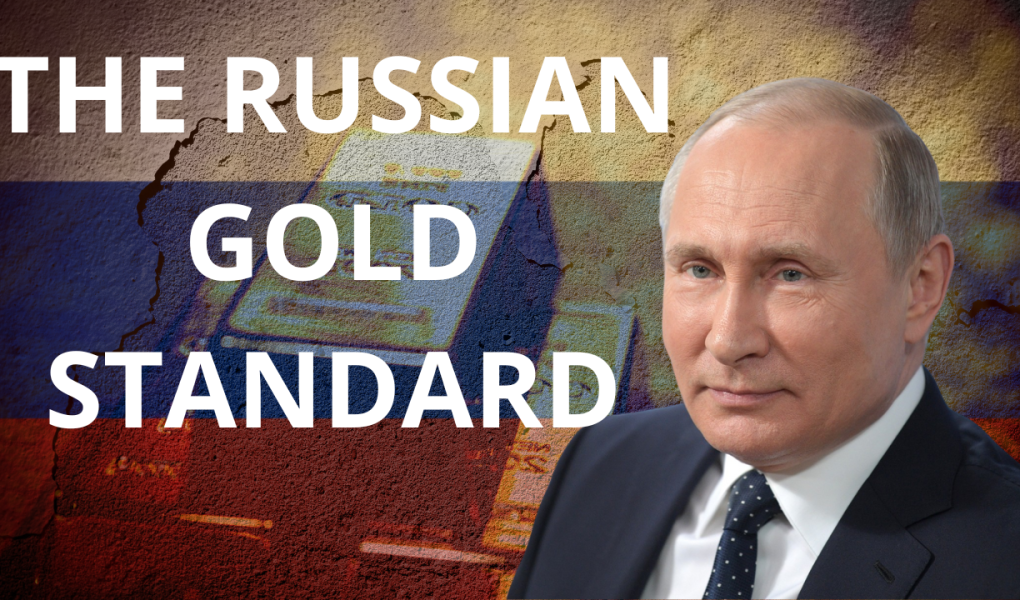 However, Russia’s energy exports are not the only thing the West benefits from. One little known fact about Russia is that its highest non-energy export is gold, exporting around $15 billion of gold bullion last year.

Also, when the West really starts annoying Russia, how does Russia respond?

It decides it will find a new way to manage its precious assets, and ensure that it’s to a level respected by its major trading partners, well away from the influence of the US dollar.

One more step in a New World Order?

Russia announced a proposal to create a new international standard for trading in precious metals. The Moscow World Standard (MWS) with the goal of the MWS becoming an alternative to the LBMA.

This proposal is the latest in Russia’s desire to create independence from NATO countries and their associated institutions and currencies.

Moreover, the sanctions against Russia over its invasion of Ukraine continue to mount.

In March the LBMA suspended the accreditation of Russian precious metals refiners. Additionally, at the G7 meeting at the end of June the G7 countries imposed a ban against any Russia-produced gold entering the UK, Canada, US, or Japan.

Gold is Russia’s largest non-energy export estimated to have added around the US $15 billion to the Russian economy in 2021.

With LBMA at the heart of global precious metal trading being located in the UK, this shut Russia out of formal international markets for gold and silver. The additional sanctions also included an asset freeze of the Russian state-owned Sberbank.

Among other sanctions, Russia’s banks were cut off from the SWIFT processing system in March 2022. See our March 3 post titled SWIFT Ban: A Game Changer for Russia?

The mounting sanctions have expedited Russia’s (and other countries such as China, Saudi Arabia) desire to de-dollarize and create systems that do not rely on G7 countries’ institutions. Russia and China have both been very vocal about their desire to elevate the U.S. dollar as the reserve currency.

Moreover, the main problem with this plan is that there is not a solid alternative.

However, proposals of a multi-currency system along with actions such as Russia demanding payment in rubles are chipping away at the US dollar’s role. (For more on Russia’s de-dollarization plan, which includes increased gold reserves see our post from December 9, 2021, titled Russia: A Prominent Player in the Global Gold Market.)

The latest proposal is another of these wedges that will chip away at the institutions in place.

According to press reports, the proposed Moscow World Standard would be a specialized international brokerage headquartered in Moscow.

However, the price-fixing committee would include central banks from the Eurasian Economic Union (EEU) which includes Russia, Kazakhstan, Belarus, Kyrgyzstan, and Armenia.

Membership would then be available to large gold players including China, India, Venezuela, and South American Countries such as Peru.

Under the MWS system proposal, the price of precious metals is fixed, either at the national level. In each key member countries’ currency or at an aggregate level. This is with a new currency such as the BRICS currency proposed at the BRICS conference also held at the end of June.

A New Currency proposal to rival the U.S. Dollar

Moreover, Putin is quoted as saying that

“the matter of creating the international reserve currency based on the basket of currencies our countries are under review … we are ready to openly work with all fair partners.”

Additionally, other countries that are currently considering joining the BRICS group are Turkey, Egypt, and Saudi Arabia.

Putin is quoted as saying that

He went on to give the example that Indian retail chain stores would be housed in Russia, and Chinese cars and hardware would be imported regularly.

The increased contracts between BRIC countries show that Janet Yellen’s ‘friend-shoring’ concept works both ways. This means the US is looking to source supplies from countries friendly to the US, wanting only “countries they can count on”.

Also, see the April 20, 2022 post titled The Friend-Shoring’ of Gold – A New World Order?  Apparently what is good for Yellen is also good for Putin since he has his own circle of friends.

Moreover, don’t let the reserve currency deceive you on the gold price.

Also, one final comment on currencies and gold. The US dollar has surged this year for reasons related to its reserve currency status. (See David Russell’s interview on August 4 with Brent Johnson – The Dollar Milkshake Theory Explained).

Since the U.S. dollar is the reserve currency, gold is generally quoted in US dollars. Additionally, in U.S. dollar terms gold is down slightly year-to-date. However, looking at gold in terms of other currencies paints a different picture.

The chart below shows gold’s performance in year-to-date in terms of other major currencies, which are all positive.

A week of important data out of the US, the EU, and the UK was kicked off on Tuesday, with the US services PMI dropping sharply to 44.1 in August from 47.3.

The markets were expecting a flattish number.

More alarming is the PMI is well below 50 which separates expansion from contraction.

This is the lowest level since the Pandemic shutdown in May 2020.

Euro area and UK PMI data were mixed with the UK economy holding up better for now but still on the brink of contraction.

Later today GDP numbers will be released from the US.

An important number to watch as we will have a better idea on recessionary risks within the US and what that would mean to a rate rise in September.

On Friday, Fed Chair Jerome Powell will give a speech, being data-dependent, making this week’s numbers all so more important not just to the Fed but to the gold price too.

The gold price has risen from its recent lows in mid-July to early August on the back that the Fed would ease back on its tightening policy through rate hikes but some of these recent gains have been given back on more recent hawkish comments, a stronger USD and treasury yields.

These are available at the lowest premium in the market  (which includes VAT at 20%).

You can purchase these online or contact our trading desk for more information.

Excellent stock and availability on all gold coins and bars. Please contact our trading desk with any questions you may have.

Starting as low as Spot plus 27% for Silver Britannia’s.