Under the motto ‘ South Summit shape the future ‘ the last edition of South Summit came to an end. The meeting returned in person and managed to bring together the agents of the Spanish and global entrepreneurial ecosystem in the La Nave space. 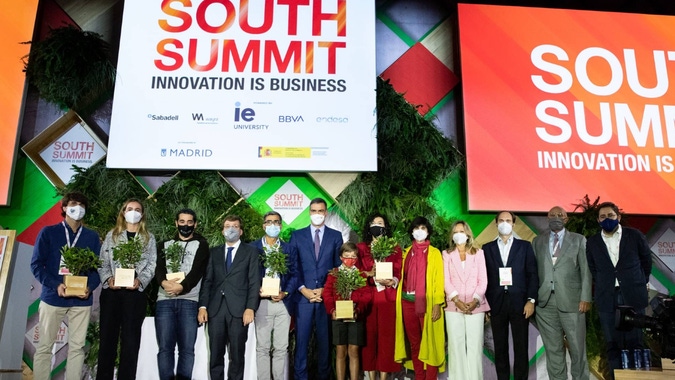 During these three days, # SouthSummit21 brought together more than 22,000 attendees, between physical and virtual, more than 680 speakers , 8,000 startups, more than 1,600 investors with an approximate portfolio of 135,000 million dollars and 7,000 members of corporations in search of innovation .

In addition, as if that were not enough, more than 25,000 connections have been closed during these three days of the meeting organized by South Summit 2021 powered by IE University, in collaboration with the Secretary of State for Digitalization and Artificial Intelligence, co-organized by the City Council Madrid and with partners such as BBVA, Telefónica, Endesa and Banco Sabadell’s BStartup.

The American startup Symba was crowned the winner of this edition, the highest award it received from José Luis Martínez-Almeida, mayor of Madrid. It is a project created in California and in which all its founding team are women, specialized in helping corporations implement talent and training programs, offering face-to-face, virtual and hybrid options.

In addition to Symba, four other startups have been recognized today in the project categories ‘ Most sustainable ‘, ‘ Best team ‘, ‘ Most innovative ‘ and ‘ Most scalable ‘, selected from the total of 100 finalists of South Summit 2021, among the most of 3,800 projects presented in this edition.

María Benjumea, founder of Spain Startup – South Summit, announced at this closing the next edition of the meeting: “South Summit will return in 2022, but we will do it in spring. From June 8 to 10 we will return, betting once again on Spanish entrepreneurial talent ” . Likewise, Benjumea made an assessment of what this South Summit 2021 has meant, “it has been a challenge, but, without a doubt, it has been the best edition of all. We have achieved a vibrant and sustainable meeting, despite the uncertainty, in which we have returned to normality, with all the protections ”.

In addition, in recognition of THE NEXT BIG THING, the competition that bets on the entrepreneurial talent of the little ones within South Summit, Diego Escudero, from the Valdefuentes School in Madrid, has taken the stage on behalf of all the children who have participated.

Sustainability was one of the main protagonists of this edition, along with the three base pillars of South Summit: Connection, Innovation and Business. Proof of this has been the intervention of Marco Lambertini, Director General of WWF International, who spoke about the impact of human activity on biodiversity. Lambertini warned that “ the consequences will not only be negative for the rest of the species on Earth, they will also be negative for our health and our way of life. We must remember that we depend much more on nature than nature on us ”. The keys to mitigating this impact, according to the Director General of WWF International, are a combination of initiatives, regulation, transparency and new technologies and a commitment from companies, governments and consumers.

Another of the most discussed topics during the last day of the meeting was the importance of gaining consumer trust and how business commitment and sustainability are key to this. This has been the main idea that Christopher Gavigan, co-founder of The Honest Company with actress Jessica Alba, has exposed today, who has highlighted that “ between 85 and 90% of the time consumers choose values and ideas over the prices ”. In this sense, Gavigan has pointed out that consumers demand that companies ” show them their values, not that they tell them about them .”

In the first two days of this meeting, the winners of the verticals of this edition were announced, which fell on: Alerion, in Energy & Sustainability; Ponicode, in Digital Business; Internxt, in Connectivity & Data; Tunefork, in Consumer Trends; Symba, in Education; Logistiko, in Mobility & Smart Cities; ienai Space, in Industry 4.0; Idoven, in Health & Wellbeing; Wheel the World, in Travel & Tourism, and Weecover, in Fintech & Insurtech.